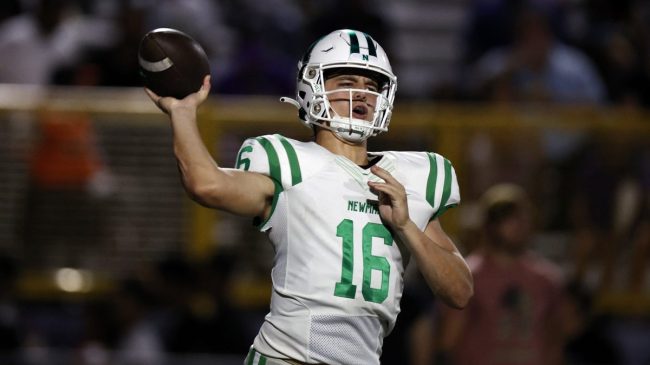 The Texas Longhorns may or may not be “back.” But nobody can say they’re not trying.

Texas stole the show despite a loss to the Alabama Crimson Tide in week two. Down to their backup quarterback, the Longhorns took the Crimson Tide to the wire and earned the praise of Alabama coach Nick Saban.

Now Texas coach Steve Sarkisian is left to sort out his mess of a quarterback situation and ensure the Longhorns don’t go from the top of the college football world to the bottom against UT-San Antonio.

Freshman Quinn Ewers appears to be the immediate future for Texas at the QB position. But what about beyond that?

Sarkisian and company apparently went all-out this summer to secure the commitment of Arch Manning.

Manning is the son of Cooper Manning and the nephew of Peyton and Eli Manning. He’s also the top overall recruit in the 2023 class according to 247Sports.

Arch chose the Longhorns over Georgia, Ole Miss and a host of others in June. Sam Khan Jr. of The Athletic’s latest report makes it easy to see why.

We FOIA'd receipts and itineraries to see what it was like when Texas hosted Arch Manning and 8 others on an official visit.

From a 5-star hotel, to an upscale steakhouse, to a cruise on the lake, the Longhorns rolled out the red carpet.

Khan submitted a FOIA request and discovered that the program spent nearly $280,000 on Manning and eight other recruits during their June 17-19 official visits.

He then used a number of sources to piece together what the official visit entailed. Manning and the other recruits were put up in a five-star hotel in Austin with a lake view. They later attended a nearly $30,000 dinner while parents attended a social that ran up a tab of nearly $12,000.

But that weekend was just an appetizer for what was to come.

“The following visit weekend, June 24-26, proved grander even without Manning. Though the itinerary was largely the same, the bigger scale with 14 official visitors left a deeper dent on the recruiting budget, as costs soared to nearly $350,000. The tab for both weekends combined approached $630,000.

The Longhorns got a strong return on the investment. Of the 11 visitors who weren’t committed to Texas before that final June weekend, nine eventually joined the class (three others entered the weekend already committed to Texas). Of the 23 visitors across both weekends, 16 are now Longhorn commits, accounting for 72 percent of Texas’ 2023 recruiting class.”

They say you can’t put a price on winning. But Texas and Texas A&M sure seem to be trying.