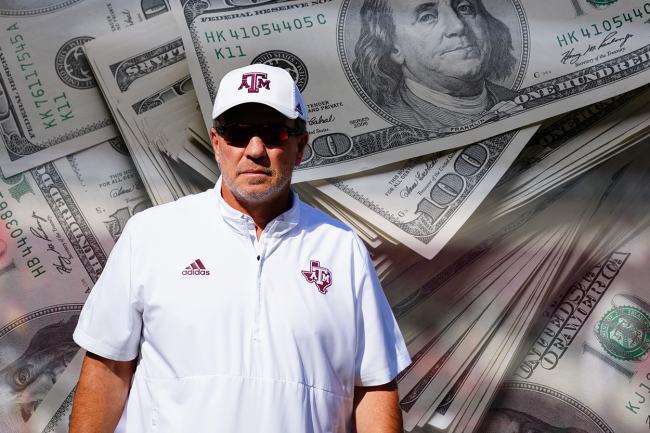 Among the commitments, head coach Jimbo Fisher and his staff landed the nation’s top-rated linebacker, top-rated defensive lineman and the second-ranked wide receiver. They also kept the nation’s second-ranked quarterback in-state, locking up the program’s biggest need for the foreseeable future.

And, although the class is all-but finished, there is still time to land another prospect or two before or on National Signing Day. With a 247Sports composite score of 328.82, it is the nation’s No. 1 class by more than 11 points over Alabama.

Needless to say, the Aggies have hit the recruiting trail extremely hard. Per a recent rumor, their boosters also spent a small fortune.

Apparently, Texas A&M’s 2022 recruiting class is set to cost the school’s boosters upwards of $30 million in deals for NIL when the prospects officially enroll.

According to a message board user with knowledge of the recruiting atmosphere in the Texas/Oklahoma area who goes by SlicedBread, Aggie boosters spent between $25 and $30 million to sure-up the nation’s top class. He reported that the effort was targeted and coordinated.

Whether exact or not, the number is likely in the ballpark. A small fortune.

IT IS PERFECTLY WITHIN THE CONFINES OF WHAT IS “LEGAL.”

Texas A&M is doing nothing wrong, or even involved. It is all coordinated through boosters, who are not even necessarily speaking directly to the recruits.

In previous years, money was (allegedly) dispersed to recruits under the table. It was and is illegal to hand a prospect money directly in return for his commitment.

That is not what Texas A&M is doing. Under the NCAA’s new rules on Name, Image and Likeness, it can be done above the table, kind of.

CLICK HERE for a great conversation about what is reportedly going on.

Like what is reportedly being done amongst the boosters at A&M — and everywhere across the country — money can be distributed through deals for NIL. A recruit cannot be offered a lucrative deal in return for a commitment directly. BUT, the idea can be floated and if/when a prospect enrolls, it can be signed and paid out.

The University of Texas reportedly weaponized NIL to land No. 1 overall quarterback recruit Quinn Ewers. Texas boosters are also paying every offensive lineman on scholarship $50,000 through NIL— a well-known fact that could entice offensive line recruits to commit to the Longhorns. SMU boosters and notable alumni also announced a huge amount of money for NIL.

It’s happening everywhere, just look at Caleb Williams. Lane Kiffin spoke about it earlier this year and had a very blunt assessment of the NIL landscape.

So, when the math is all said and done, for Texas A&M to spend that reported number, is not hard to believe. The price of oil is up right now, there is money in the state of Texas. Good for the Aggies boosters for having that kind of dough and using it effectively.

Here is how it allegedly plays out in College Station, and across the country:

According to SlicedBread, the Aggies even have a backstop in place. The deals are structured to keep players in College Station for multiple years.

Contracts are set up as multi-year deals. If a player leaves, he leaves the money behind in Texas.

NIL has changed the landscape of college football and what A&M is doing is completely legal and clearly effective.

Not only do the Aggies have the No. 1 recruiting class for 2022, but they currently hold the No. 2-ranked class for 2023. They all-but print money in College Station and it is really paying off. Literally.

EDITORIAL NOTE: I identified the source Sliced Bread as someone with knowledge of recruiting in this specific region.