Lane Kiffin Says What Everyone Is Thinking And Does Not Hold Back On NIL, The Transfer Portal 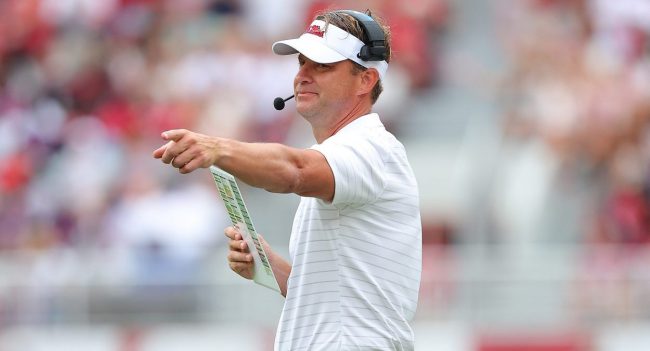 Ole Miss head football coach Lane Kiffin is not going to sit back and ignore the obvious. In a world where the transfer portal and NIL has changed everything about the way that college football works, it is all about money.

“I don’t think people really say it this way, but let’s not make a mistake: We have free agency in college football,” Kiffin said. “The kids a lot of times go to where they’re going to get paid the most. No one else is saying that, maybe. But the kids say ‘This is what I’m getting here from NIL.’ “

What Kiffin is referring to is Name, Image and Likeness. Prior to July 1, 2021, student-athletes did not own their own person and could not make money from being themselves.

For example, prior to the NCAA’s new NIL laws, Ohio State had wins vacated because its quarterback (and others) exchanged game-worn merchandise for a tattoo. Now, after the new legislation, that would not be considered a violation and athletes are selling their own personalized merchandise from their own clothing brands.

In addition, athletes can make money from things like speaking appearances or social media promotion. Some athletes have partnered with car dealerships and received a vehicle in return.

And NIL isn’t the only thing that has changed college football in the last year.

There is also the transfer portal.

Established in 2018, players can declare that they are transferring and begin to communicate with prospective coaches while still on campus at their previous school. This year, the NCAA allowed players to transfer one time without penalty, meaning that they can be eligible at their new school right away.

As a result, high-profile players are transferring more than ever before. This year’s transfer portal included an insane amount of quarterbacks, for example.

When you combine the transfer portal with NIL, it’s chaos.

Take Texas quarterback Quinn Ewers for example. The former No. 1 overall recruit in the Class of 2022 reclassified last summer, forwent his senior year and enrolled at Ohio State as part of the Class of 2021.

He made a lot of money in NIL during his freshman season but redshirted and did not even attempt a pass. And then, after the conclusion of the fall season, he entered the transfer portal.

Ewers, from Texas, wanted to go back home and was considering Texas Tech and Texas as his final two options. As a part of the Longhorns’ recruiting pitch, the staff reportedly offered him a lot of money in NIL deals that were already set up if he were to sign.

This weaponization of NIL is exactly what Kiffin is talking about.

Kiffin uses his free agency metaphor with one caveat. During NFL free agency, players sign a contract for guaranteed money.

On the college level, players do not. Who is holding them accountable? College football programs are not tied to a contract that requires them to keep their financial promises to players.

“At least in the NFL there’s free agent contracts so they know what it is and they have to sign it, versus places saying, ‘Hey, when you come here you’re going to get this much money,’ and then when they get there, do they really get it?” Kiffin said. “It’s a new world.”

To make things even more complicated, the recruiting process occurs as some schools are still in the middle of their season. Like Ole Miss.

The Rebels are set to play in the Sugar Bowl on New Year’s Day. The team is practicing to get ready for their game.

Meanwhile, Kiffin is forced to hit the road to try and land a potential transfer while also dealing with his own internal operations. And vice versa.

“Right now you’re practicing for bowl games,” Kiffin said. “We had a player not here (Monday) because he’s still on his official visit to another place. Just really think about that. It’s very strange. I had a recruiting weekend this weekend where I had to fly out really quick to go see someone that’s at another school but is in the portal.”

And the chaos doesn’t stop there.

Because a program needs to hold on to an available scholarship, or scholarships, in case that it could land a game-ready veteran from the portal, it is offering less scholarships to high school kids that are on the bottom level of a recruiting class.

“Getting out on the road, there’s a lot of frustration with junior college coaches and high school coaches because they feel like kids that were in the bottom level of getting offers and going places at the bottom of classes now aren’t,” Kiffin said. “People are using them up on transfers. So now we’ve got high school kids with nowhere to go when they had places.”

Kiffin continued on to say that all of the issues are stemming from what was a really good idea to help the kids. You can find his full comments here: