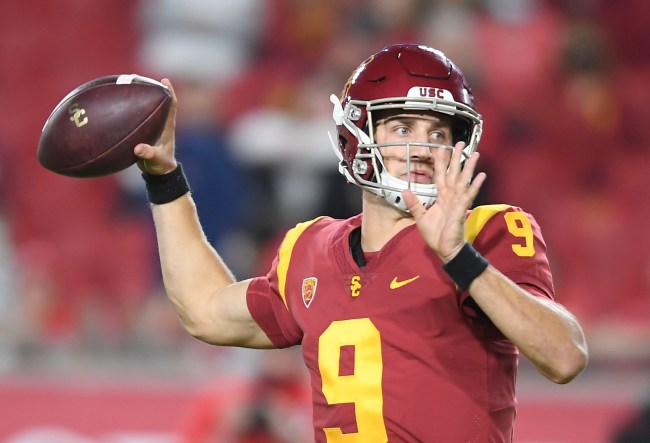 As if the drama of the NCAA’s coaching carousel wasn’t enough, the transfer portal is quickly heating up. College football fans were already buzzing about the transfer portal with Bo Nix’s addition and now Kedon Slovis has added his name to the mix.

2019 3-star QB Kedon Slovis has entered the transfer portal after passing for 7,576 yards and 58 TD during his time with USC @rivalsmike @RyanYoungRivals https://t.co/4gBi6gos8u

Slovis had served as USC’s starting quarterback for nearly the entirety of his first 2 college seasons. He opened this season as the team’s starter as well, but a combination of injuries and poor play opened the door for Jaxson Dart to take over.

Now it looks like the job will be Dart’s to lose next year with Slovis choosing to leave and Lincoln Riley seemingly securing USC’s future with Malachi Nelson in their 2023 recruiting class.

QBs currently in the transfer portal:

Even with all of those available options, Slovis should have no issue generating interest in the transfer portal. He was the Pac-12’s Freshman of the Year in 2019 and followed that up by being named to the All Pac-12 team in 2020.

2021 was undoubtedly a disappointment for both Slovis and the Trojans, but there is plenty of reason to believe he can get back to slinging it like he was in his first two years.

For now, we get to just sit back and let the rumor mill churn.