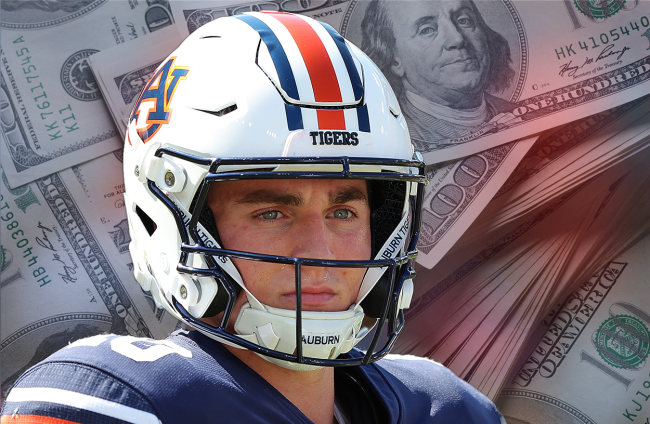 Auburn quarterback Bo Nix hit the transfer portal late on Sunday night. It was a largely unexpected move that could potentially send shockwaves around the landscape of college football. The internet was certainly caught off guard by the decision.

Now that Nix is no longer with the Tigers, the former five-star recruit will have one year of eligibility remaining as a graduate transfer. He is able to play right away wherever he ends up, but where that will be is unclear.

Quite a few schools could might make sense for Nix, including UCF, Cincinnati, Florida, Clemson, Georgia Tech, Jacksonville State, Oregon, South Alabama, Ole Miss, South Carolina, Virginia Tech and Nebraska. His transfer was not foreseen, so it is pretty wide open as to where he could end up.

However, wherever he goes, there is one big question looming…

What happens to Nix’s deals for Name, Image and Likeness?

Milo’s, known primarily for its sweet tea, is a largely regional company. You are most likely to find it in the south, but it can be found on a national level if you look hard enough.

“We’re now available from Anchorage to Miami and from San Diego to DC,” the company’s CEO said back in 2014.

As a result of the nationwide availability, Nix can likely keep his deal no matter where he ends up. However, because sweet tea is such a regional thing that is primarily celebrated in the southeast, would Milo’s want to keep him on if he goes to, say, Oregon? Or would they want to find someone with a larger voice for their top market?

More than likely, Nix’s deal with Milo’s is going to be fine. His Bojangles deal, on the other hand, could be in jeopardy.

Bojangles, for those unfamiliar, is a regional fast food chain that specializes in (really tasty) fried chicken and buttermilk biscuits. Founded in North Carolina, it is a very regional chain, located primarily in the southeast.

It has 787 locations across 14 states. More than half of them are in North Carolina, South Carolina and Georgia.

Nix, who played in Alabama, was a spokesperson in the company’s sixth-largest market. If he transfers to a school in a state where Bojangles is not — take Nebraska for example — will he get to keep his deal?

Obviously, we may never know about the structure of Nix’s deal with either Milo’s or Bojangles. Was there a transfer clause? An opt-out?

Name, Image and Likeness is such a new beast that this is unprecedented. If companies interested in working with college athletes are paying attention, Nix’s transfer is going to set the tone for the navigation of NIL moving forward.