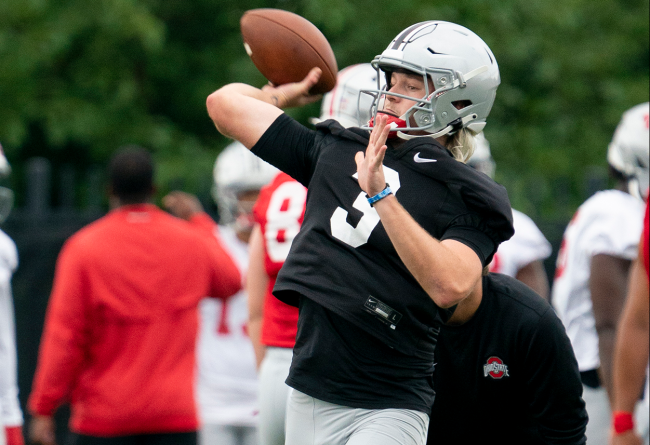 Quinn Ewers is in the driver’s seat of a very lucrative decision. After entering the transfer portal last week, Ewers is seeking opportunity with a new college football program and can make big money in the process.

As the former No. 1 overall recruit in the Class of 2022, the 18-year-old quarterback chose to forgo his senior year, reclassify and enroll at Ohio State. He signed some rather large deals for his Name, Image and Likeness in the process.

However, because of his late arrival in Columbus, Ewers never really got a fair shake at the starting role. C.J. Stroud ended up winning the job and has played his way into becoming a Heisman Trophy finalist.

As a result, Ewers hit the transfer portal last Friday. Buckeyes head coach Ryan Day was caught off guard by the decision, but the writing was clearly on the wall.

Now, less than a week into his search for a new school, he is reportedly down to two schools— Texas and Texas Tech.

Although it might seem like a no-brainer to choose the Longhorns, the Red Raiders have made some recent coaching hires that might move the needle. The case for Ewers to sign with Texas Tech is five-fold, and it could make a lot of sense for him to head to Lubbock.

However, Texas is not holding back.

Multiple former Texas players have tweeted at Ewers with hopes of getting him to Austin. It goes against the No. 1 unspoken rule of recruiting — DON’T TWEET AT RECRUITS — but because they are former players, it is a little bit more acceptable.

@QuinnEwers bring a Big12 title and a Natty to Austin bro!!!!!

Lead us back to the promise land @QuinnEwers 🤘🏽

The recruiting pitches have not stopped there. In fact, that is barely even the beginning.

As the new world of Name, Image and Likeness unfolds, the Longhorns are reportedly weaponizing the money behind it. It was bound to happen eventually, as schools can start to indirectly offer their recruits financial gain to join their program.

For example, a college program could line up a dealership that is willing to give a recruit a car as part of a “promotional deal.” In turn, that school can guarantee that a new car if he commits.

Well, per Rivals insider Geoff Ketchum, that is pretty much exactly what is happening with Ewers and Texas. According to Ketchum, the Longhorns are offering Ewers “first round draft pick-level” NIL money.

Word on the street is that first round draft pick-level NIL money is on the table for Quinn Ewers if he chooses Texas as his transfer destination.

The weaponization on the NIL front is fully underway.

What that means in terms of an exact number is unclear. However, the last pick in the first round of the NFL Draft is estimated to earn somewhere around $10 million in contract salary and $5 million in signing bonus.

Could that mean that Texas is offering Ewers closer to $15 million? Probably (hopefully) not.

Does it mean that Ewers is being offered more than $1 million in NIL? It certainly seems likely.

That is an astronomical amount for an 18-year-old, let alone the average American. If Ketchum’s report is true and Ewers is being offered first round draft pick-level NIL money, it is hard to imagine a world in which he does not land with Texas. The Longhorns would change the landscape of college sports forever.