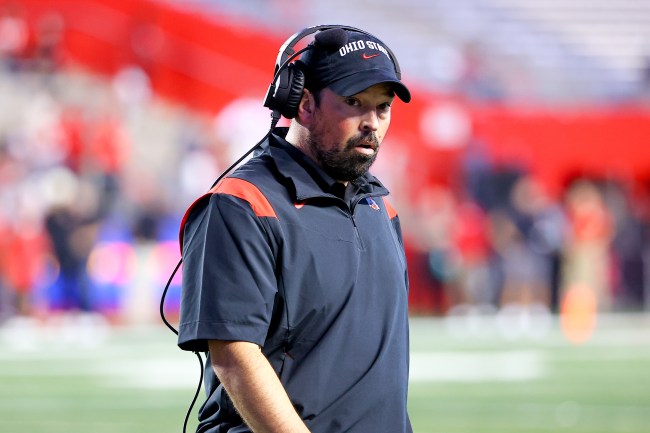 Quinn Ewers sent shockwaves around the country when he decided to forgo his senior year of high school, reclassified, and committed to Ohio State. Now, less than four months after he arrived, the former No. 1 overall recruit in the Class of 2021 is on his way out.

His former head coach Ryan Day is, for some reason, caught off guard by the decision.

Ewers arrived on campus in mid-August. He was not out of the competition for the starting quarterback job, but he was certainly not there long enough to truly compete.

As a result, by the time he got there, redshirt freshman C.J. Stroud had already separated himself from Jack Miller and Kyle McCord. Since then, Stroud has inserted his name into the Heisman Trophy finalist conversation and led his team to a Rose Bowl birth with a 10-2 record.

Stroud was the Big Ten’s offensive player, quarterback and freshman of the year in 2021, and barring unforeseen circumstance or injury, he will be the starter next season. Behind Stroud, McCord is expected to stay with Ohio State and the Buckeyes received a commitment from 2022 four-star recruit Devin Brown.

Thus, it makes perfect sense for Ewers to seek opportunity elsewhere. He will not be able to play in Columbus for at least one more year.

And yet, Day was somewhat surprised by the decision.

“I’d rather not get into too many of the details, but it kind of caught me a little bit off guard, for sure,” Day said. “You try to do the best you can on the front end of explaining exactly what is going to happen and then do the best you can and communicating and follow through with it. But things change and you have to adapt.”

Why Day is caught off guard, I don’t know. Ewers wants to play and he does not have that opportunity in the immediate future at Ohio State. And when Stroud does graduate, Ewers would still have to compete against Brown and McCord. His leaving is pretty straightforward and certainly nothing to be caught off guard about.

In addition to admitting he was caught off guard, he addressed what a crazy situation it is for Ewers, for the team and for college football. Day also wished him nothing but the best.

“I think he was in a very unique situation, for sure,” he said. “We wish him nothing but the best of luck moving forward. But, boy, there’s a lot of stuff going on right now in college football with a lot of this stuff, whether it’s early enrollees, the transfer portal and those types of things. We’re just going to do the best we can to try to adapt as time moves on, but we certainly wish him nothing but the best of luck.”

You can listen to Day’s full comments here:

As for Ewers, he is likely headed back to Texas. We know where he is not transferring. We also know what school is trending in the right direction.

However, we do not know where he is headed, although all signs point to joining the Longhorns. Regardless of where he ends up, Day should not be surprised.