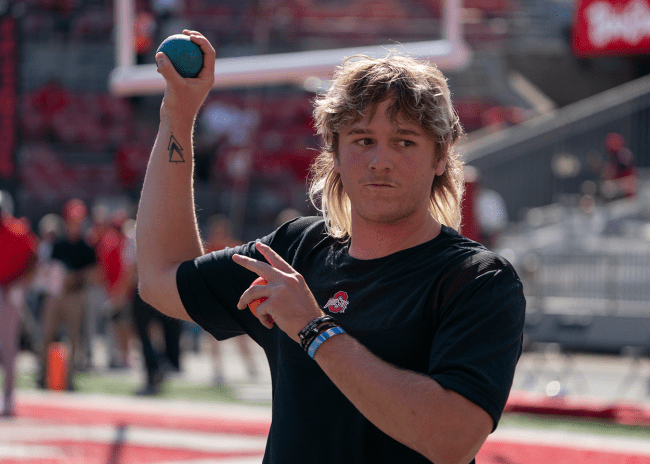 Quinn Ewers was the most talked about college football recruit in a very long time. The five-star quarterback from Southlake, Texas decided to forgo his senior year of high school and enrolled early at Ohio State.

Ewers arrived late to campus in Columbus, did not win the starting job and redshirted. He did not play a single snap for the Buckeyes in 2021, but made a boat load of money through deals for his Name, Image and Likeness.

Now, 17 months after committing to play for Ryan Day, he is back up for grabs.

Ohio State’s freshman quarterback C.J. Stroud has quickly become a superstar and has his name in the mix for the Heisman Trophy. As a result, Ewers does not see an opportunity to become the starter for the next two seasons and entered the transfer portal earlier this week.

He will have four years of eligibility remaining at his next program. Reportedly, he is eyeing a school back in his home state of Texas.

That would be one of the following programs:

Obviously, the No. 1 prospect in the nation is not going to Rice, North Texas, Texas State, UTEP or UTSA. He probably won’t go to SMU or Houston either, but that leaves seven schools.

Per recent reports, we can cut that number to six. Texas A&M is not interested in Ewers.

Per multiple sources, there is no truth to the reports that Texas A&M will pursue Quinn Ewers out of the transfer portal.

“They are rocking with Weigman. He’s the guy. Jimbo loves him.” pic.twitter.com/owTTTWSPqq

Couple of people have confirmed to me what @R_Brauninger reported first: A&M isn’t pursuing former Ohio State QB Quinn Ewers. They’re more than happy with Conner Weigman and don’t want any disruptions to the 2022 class.

Head coach Jimbo Fisher has five-star quarterback Conner Weigman committed to the program and doesn’t want to muddy the waters. Thus, Ewers will have to look beyond the SEC (even though the Longhorns may join the conference by the time he graduates) if he wants to stay in-state.

There is also the chance that Ewers could extend his search beyond the state of Texas. USC, Clemson, Georgia and Ole Miss could also be interesting options, though unlikely.

Per another report from 247Sports’ Steve Wiltfong, Texas Tech believes it has a chance.

“Yahoo Sports’ Pete Thamel reported Texas, Texas A&M and Texas Tech. And I sent out some text messages right after his report and, around the Texas Tech program, I think that there is some confidence about their position landing Quinn Ewers,” Wiltfong said Friday on CBS Sports HQ, via 247Sports. “Joey McGuire, the new coach coming over from Baylor, high school coach in that state — very well-respected person in the state of Texas.”

That seems like optimism from Texas Tech at this point, but it is not impossible to imagine Ewers playing for the Red Raiders. All we know, as of right now, is that he will not be playing for the Aggies.