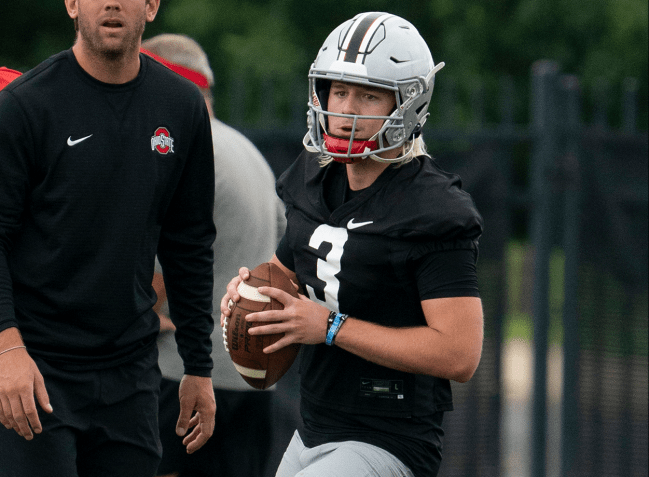 The Air Raid is returning to Lubbock, Texas and it might pay dividends with one of the nation’s most sought-after recruits. Quinn Ewers, who essentially restarted his recruitment by entering the transfer portal last week, could end up choosing the Red Raiders.

Ewers’ situation is unprecedented. After skipping his senior year of high school to reclassify and enroll early at Ohio State, the No. 1 overall prospect in 2021 made a fortune in deals for his Name, Image and Likeness without attempting a single pass, and is now on his way out.

As the dust settles (he only entered the portal on Friday), early suitors from his home state have become the favorites. No matter where he ends up, Ewers is reportedly headed back to Texas.

Of the 12 FBS programs in the Lone Star state, three schools have emerged as his top choices: Texas, Texas Tech, and TCU. He will not be going to Texas A&M.

Texas is considered the favorite until proven otherwise. Head coach Steve Sarkisian has recruited Ewers since his days at Alabama and Ewers grew up as a Longhorns fan.

More than likely, the chance to bring the Texas program back is too great to pass up. However, after a notable hire at Texas Tech, things get a bit more interesting.

Why would a former No. 1 overall recruit chose the Red Raiders?

The answer is five-fold.

The fifth and final point might be what lands Ewers at Texas Tech. The Red Raiders are set to explode offensively in the next few years after hiring Kittley.

He also has the Mahomes seal of approval.

The bottom line is that Kittley puts up numbers.

The 30-year-old began his coaching career with the Red Raiders as a grad assistant coach and assistant quarterbacks coach under Kingsbury. Kittley learned Kingsbury’s Air Raid offense (which he learned by playing under Mike Leach and coaching under Dana Holgerson), made it his own, and made it pay off.

After leaving Texas Tech, he turned Houston Baptist’s offense into one of the best in the nation as the offensive coordinator. His success has been astronomical in such a short amount of time.

In 2018, the Huskies averaged 27.4 points and 394.3 yards per game. His quarterback, Bailey Zappe, threw 23 touchdowns and broke the school career and single-season records for completions, attempts, yards and touchdowns.

During the COVID-19-shortened year, Zappe completed 65.6% of his passes for 1,833 yards and 15 touchdowns in only four games.

And then, ahead of the 2021 season, Kittley accepted the same role at Western Kentucky and brought Zappe with him. What he has done this year is crazy.

The Hilltoppers averaged 43.1 points per game (2nd in Division-I) after averaging only 19 in the year prior. Kittley throws the ball a lot and it has turned Zappe into a legitimate NFL prospect.

BAILEY ZAPPE WAS ON THE MONEY WITH THIS THROW 😭 pic.twitter.com/Ae3Z1X5KHq

Okay, the ball placement on this 2-pt conversion pass from Bailey Zappe is … ridiculouspic.twitter.com/ycZ9G10W8W

Zappe is currently on pace to break the NCAA single-season records for passing yards and touchdown passes with one bowl game left. Though 13 games, he is currently 443-of-640 for 5,545 yards and 56 touchdowns.

Why wouldn’t Ewers want to plug right into an offense where he could throw the ball close to 700 times per season? Doesn’t that sound fun?