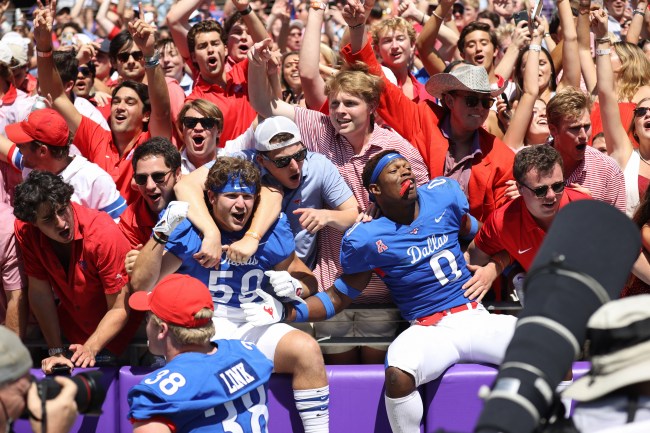 Southern Methodist University football players are about to make a lot of money— legally. A group of prominent SMU alumni and businesses pledged over $1 million annually for a Name, Image and Likeness program that is tied to the football team on Tuesday.

The NIL program will be called ‘PonyUp’ and is intended to make SMU the leader nationally in the space. It will be centered around helping SMU players in the present while preparing them for life after college and has significant backing. Among the donors are Eric Dickerson, Paul Lloyd, Luke Crossland, Dick Anderson, Kevin Beachum and Richie Butler.

Here is how the program will operate, according to a release:

The program will have several elements including Professional Development, Community, and as Clearing House/Matchmaker for businesses and players. For example, the Professional Development program called “NIL Learnships,” an innovative twist on the paid internship, whereas players are connected to successful entrepreneurs and develop a 1 to 1 mutual mentorship, with both parties exchanging ideas and different perspectives, and the athlete getting enhanced mentoring in areas such as financial management and other business skills. The NIL experience will be shared via social post, appearances, and other experiences. There have been two community program verticals created so far, one in which businesses will support causes important to the players and will sign NIL deals to support the effort, and the other being created to promote Dallas and things to do in Dallas, utilizing NILs to promote the effort.

The ‘PonyUp’ program is going to get money into the pockets of football players. It is completely legal under the NCAA’s interim rules on Name, Image and Likeness that were put into place in July.

By pledging $1 million in NIL annually, it means that each of the 105(ish) players on SMU’s roster could receive $9,500 each year. It doesn’t quite work like that, but it could.

Insane. Just six months ago, this was not even a thought.

This ‘PonyUp’ program is revolutionizing the sport and how it functions. SMU’s boosters can now weaponize the NIL fund on the recruiting trail by promising a guaranteed amount of money in Name, Image and Likeness opportunities if an athlete is to commit to the Mustangs.

For example, imagine that SMU is recruiting a highly-coveted prospect. The boosters could approach him and say, “if you come to SMU, we can guarantee you $50,000 a year in NIL.”

That money, which, again, is completely legal, would then be paid out to the player each year if he enrolled. In return, the quarterback would participate in the aforementioned “NIL Learnships.”

Additionally, said recruit could sign deals with a corporate sponsor. The sponsor would pledge X amount of money for the player to post X amount of times on social media. Or something like that, it’s not an exact science.

That is a massive leg-up on the recruiting front. SMU’s boosters can now position themselves against other schools that do not have $1 million annually to pay out for NIL.

This will not be the first fund like this.

College football players have been paid large amounts of money under the table for years. Take SMU’s Pony Express, for example.

Now, with the legalization of NIL, it can be done above ground. And it’s not just SMU’s boosters.

When it came to recruiting five-star quarterback Quinn Ewers, Texas reportedly did the same thing. It offered him a lot of money in NIL deals to sign with the Longhorns, and he did.

However, SMU’s boosters are the first to go public with its fund. It is a massive number backed by massive boosters.