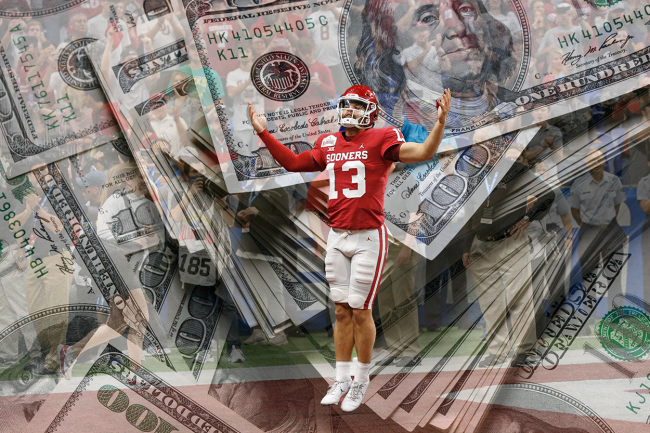 Oklahoma quarterback Caleb Williams has officially entered the transfer portal. A lot of speculation surrounded the true freshman, former five-star recruit and his future with the Sooners after Lincoln Riley left for USC, and now the conversation is only going to get louder.

As a result of Williams’ decision, his recruitment is once again wide open. However, this time it has a unique twist— NIL.

When the 20-year-old was deciding on a school out of high school, programs were only (allegedly) able to offer him money under the table. The bagmen had to go to work, and he ultimately landed in Norman.

Now, a year later, programs can offer him legal money— kind of. Although the schools themselves cannot pay him directly, they can arrange lucrative deals for Williams’ name, image and likeness prior to his commitment that they can then offer him if he was to transfer to that program.

Thus, because of this new wrinkle, Williams’ recruitment is set to become a bidding war.

While the program, its coach and Williams’ fit undeniably will play a role in his future, as will money. Whichever school — through its boosters and NIL funds — can offer him the most lucrative deal(s) will have a significant upper hand.

In his announcement, Williams said that staying at Oklahoma is an option. If the Sooners can get him enough money, he might be convinced to stay.

However, it is hard to imagine a situation in which Williams does not rejoin Riley in Los Angeles. USC is the clear-cut frontrunner and Georgia is also rumored to be in the mix.

Delusional Auburn fans have also managed to convince themselves that landing Williams is a possibility. It is not. Auburn fans are delusional.

Ole Miss and Penn State could also be options, but the odds are also extremely slim for the Rebels and Nittany Lions.

Ultimately, it is going to be a very costly battle between the Bulldogs, Trojans and Sooners. In almost every scenario, it ends with Williams in Los Angeles.

At 6-foot-1, 210 pounds, USC is likely about to get themselves the quarterback that it has been missing. After throwing for 1,912 yards and 21 on 136 completions with only four interceptions, the Trojans will be hopeful that Williams is the missing piece that allows them to become an immediate national championship contender.