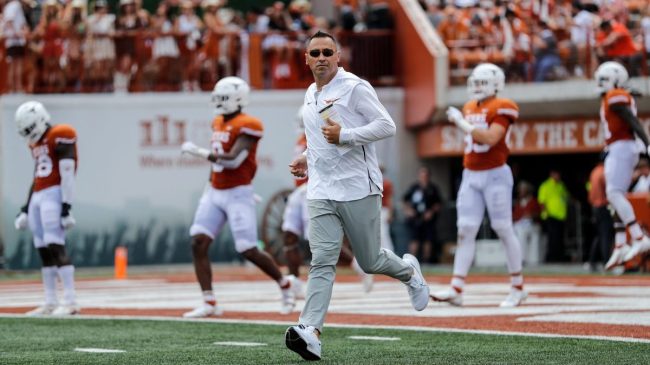 Despite a heartbreaking loss, the Texas Longhorns turned the heads of just about every college football fan in the country last week.

Texas played host to the top-ranked Alabama Crimson Tide and entered the game as massive, three-touchdown underdogs. Rather than getting blown out, though, the Longhorns repeatedly punched the Crimson Tide in the mouth before falling on a last-second field goal, 20-19.

The performance had fans and media alike once again asking if Texas is back.

Longhorns’ freshman quarterback Quinn Ewers was one of the stars of that game. That’s despite Ewers playing less than a quarter before leaving with an injured shoulder. Ewers suffered the injury after a hit by Alabama linebacker Dallas Turner that some are dirty.

Sophomore quarterback Hudson Card replaced Ewers and played admirably, but the difference in the level of play wasn’t difficult to spot.

* Bama's passing game — both pass catchers and pass protection — is problematic at the moment.

* Gonna go out on a limb and say the injury kinda sorta made a difference pic.twitter.com/3KFAeNSN56

An MRI following the game showed that Ewers suffered a severe sternoclavicular sprain in his left shoulder. The young star is set to miss at least a month while recovering.

Card finished the game, but also injured his ankle in the contest and had a noticeable limp at the final whistle.

Now second-year Texas coach Steve Sarkisian is once again left to answer questions about the quarterback position, and he seems sick of it.

Steve Sarkisian Fires Back At Report Over Question About Quarterbacks

Sarkisian finds himself in a tough spot with Ewers laid up and Card potentially hobbled. Redshirt freshman Charles Wright took snaps with the first team in practice. Wright is the next man up if Card can’t go.

Sarkisian met with the media on Thursday and, unsurprisingly, was asked to address the situation.

Texas football coach was asked if he could clarify if all three QBs would be available on Saturday and said: "What I can clarify is all three guys got better this week. I don't think it's my job to get on here and tell you guys what our game plan is going to be."

The Longhorns’ coach then got a little bit testy after a follow-up question. He gave a response that some are calling Nick Saban-esque.

Oh boy … Texas coach Steve Sarkisian was asked another QB question: "You guys can keep poking the bear on what I do at quarterback. At the end of the day, I'm not going to give you game planning decisions or how we practice. There's a reason you guys don't come to practice."

The interaction may not sit well with media members. But it did go over well with Texas fans.

Steve Sarkisian is shaping up to be the “coach” Texas has been looking for..

Texas has needed a coach to put the Texas media in check. Idk how y’all feel but I fucking love it.

Love it. He can read an update and not take ANY questions as far as I’m concerned. Just win! There’s no need for us to either tip our hand or allow a journalist to twist his words.

The Longhorns welcome UT-San Antonio to Austin on Saturday. DraftKings Sportsbook lists Texas as a 12.5-point favorite, even without a clear starting quarterback.