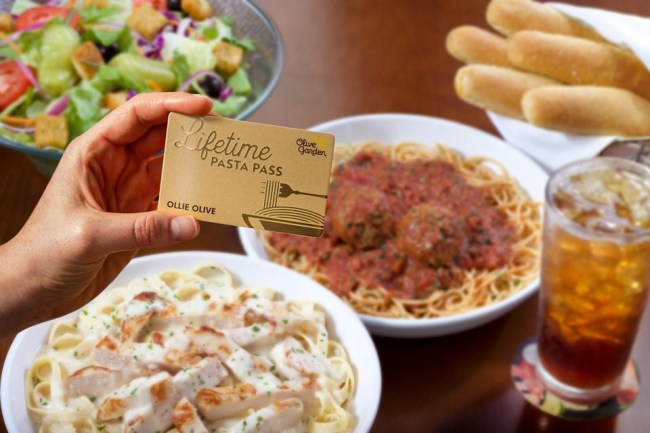 The Olive Garden is an American institution known for delicious breadsticks and endless pasta. They are one of the major chains that always cashes in on big promotions like bottomless soup, salad, and breadsticks and for the fast few years, they’ve been killing it with a never-ending pasta promo.

The normal Never Ending Pasta pass costs $100 and pass holders get nine weeks of unlimited pasta and sauces at the Olive Garden. This deal also includes soup/salad and breadsticks.

Now I’m not the type of person that you’ll find eating at the Olive Garden on the regular but I also recognize one hell of a deal when it slaps me in the face and that’s exactly what this is if you can get it. For the first time ever, the O.G. will be selling a NEVER ENDING PASTA FOR LIFE pass for $500 instead of $100. 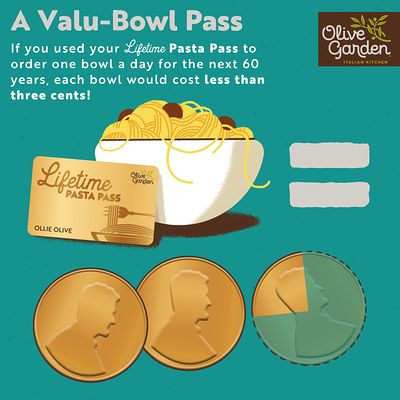 What’s crazy is they will only be offering up 50 of these passes in total.

The first 50 people to get through online when the Never Ending Pasta Passes go on sale this Thursday (August 15, 2019) at 2pm EST will have their choice of whether or not to buy one of the Never Ending Pasta FOR LIFE passes. Those first 50 customers will receive an email notification at the time they buy their passes letting them know they can upgrade to unlimited pasta for life.

From that moment on, they’ll have 48 hours to make the decision. If they pass on the Never Ending Pasta For Life passes then the next batch of people will be notified until they’re gone. But keep in mind that these limited-time passes have previously sold out within a matter of seconds so getting through as one of the first 50 customers will be a nearly impossible task.

The Olive Garden has previously offered a year-long pass and a Pasta Passport that involved an 8-day trip to Italy, but this marks the first time they’re offering up a life-long pasta pass.

In order to get down on the madness, you’ll need to go to this website and be ready for the 2pm sale on Thursday.