LA Transported Back To 1969 For ‘Once Upon A Time in Hollywood,’ DiCaprio And Pitt Are Old School Cool 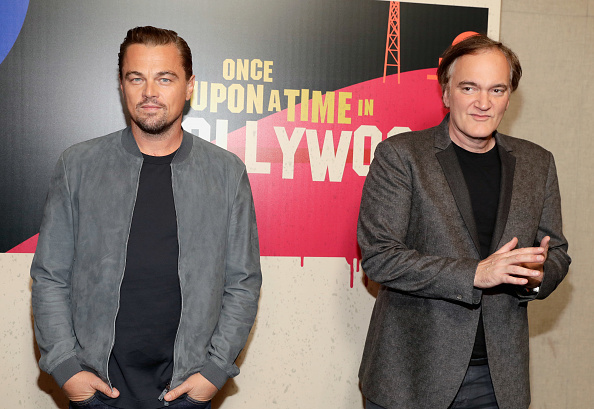 Quentin Tarantino is hell-bent on creating an authentic version of 1960s Los Angeles in his upcoming Once Upon A Time in Hollywood movie about the “Helter Skelter” murders by the Manson Family. Thanks to some leaked photos and videos, get a glimpse of how Tarantino transformed 2018 Los Angeles into L.A. in 1969 (nice). This week, several blocks of Hollywood Boulevard were transported back in time nearly 50 years.

Tarantino is filming ONCE UPON A TIME IN HOLLYWOOD in…well, Hollywood. And he's turned back the clock on Hollywood Boulevard. Everything looks awesome, and I wish it could stay like this forever. pic.twitter.com/2niReRewVC

Quentin Tarantino’s ONCE UPON A TIME IN HOLLYWOOD making its presence known out on Hollywood Blvd. pic.twitter.com/YQ17IJPcaO

Once Upon a Time in Hollywood set
The 9th film by Quentin Tarantino
More: https://t.co/5TCcdtQFP1#quentintarantino #BehindtheScenes pic.twitter.com/eXLGGb89wI

You can expect to see much more of the timewarp of Los Angeles. “Street by street, block by block, we’ll transform Los Angeles into the Hollywood of 1969,” Tarantino said. But it isn’t just the retro buildings and cars that have found a portal back to 1969. The all-star ensemble cast is getting their ’60s groove on with old school styles. Leonardo DiCaprio and Brad Pitt are dressing the part of the time of the film.

Hug between #bradpitt & #LeonardoDiCaprio on the set of Quentin Tarantino’s new film Once Upon A Time in Hollywoodhttps://t.co/UHzDAPZWyB pic.twitter.com/ApcPusr4Pt

Tarantino’s magnus opus about the murders by the Charles Manson Family will also star Al Pacino, Burt Reynolds, Margot Robbie, Kurt Russell, Dakota Fanning, Timothy Olyphant, Tim Roth, Emile Hirsch, James Marsden, Damian Lewis, and Luke Perry. Once Upon A Time in Hollywood is scheduled to hit theaters a year from today on July 26, 2019, the 50th anniversary of the murders.