Our Biggest Questions Heading Into Chapter 10 Of ‘The Mandalorian’ 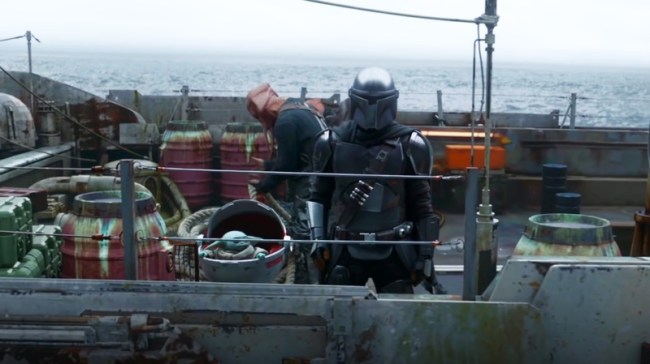 Yesterday, we brought you the news of the episode description for Chapter 10 of The Mandalorian, which is as follows:

“The Mandalorian must ferry a passenger with precious cargo on a risky journey.”

Now, while the episode description isn’t necessarily saying much, it’s actually telling us quite a lot, so let’s dive right into it and ask some questions.

Who is the passenger that Mando must ferry?

My best guess is that Mando will be accompanying Sabine Wren, the character that WWE star Sasha Banks is rumored to play. A Mandalorian warrior who made her debut in Star Wars Rebels, it’s unclear exactly what Sabine Wren is trying to transport at this time. A safer bet, though, is that she’ll become one of Mando’s allies, similar to Timothy Olyphant’s Cobb Vanth.

The big reveal at the end of the season two premiere was that  Boba Fett was keeping an eye on Mando as he rode off into the Tattooine sunset with Boba’s iconic armor in his possessions. However, given the general episodic “adventure of the week” structure of The Mandalorian, it wouldn’t shock me if we don’t see Boba Fett again for another few weeks.

Is Baby Yoda going to flex his powers this week?

When it comes to Baby Yoda, I like to say that he either has two types of moments: “awwww” moments and “holy shit!” moments. While the season two premiere was chock full of the former moments — Baby Yoda just looking generally adorable all the time — there weren’t any “holy shit!” moments, as The Child largely kept himself out of the action. But with the pair now isolated on a ferry, look for Baby Yoda to have Din Djarin’s back.

Chapter 10 of The Mandalorian hits Disney+ at 3 a.m. EST on Friday, November 6. We’ll be recapping and reviewing the episode in full on the Post-Credit Podcast, so make sure to subscribe to follow along.

Will we see Moff Gideon?

My biggest gripe with the season two premiere is that we didn’t get an update on Giancarlo Esposito’s villainous Moff Gideon, who was last seen using his Dark Saber to free himself from his crashed TIE Fighter. Given that Gideon’s pursuit of Baby Yoda is the dramatic crux of the series, I’m hoping The Mandalorian returns to the plotline as soon as possible and gives us an update on Moff Gideon’s moves this week.