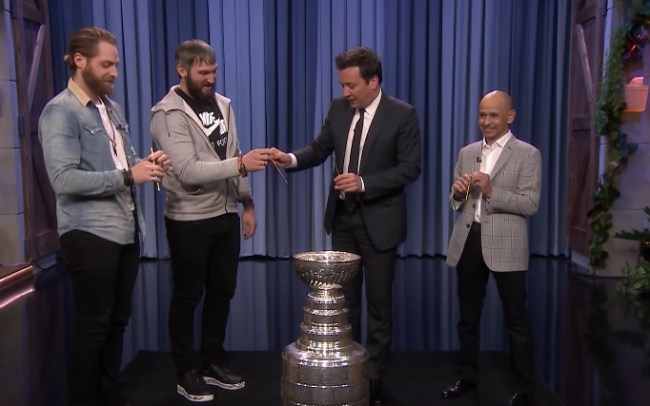 Alex Ovechkin’s dreams have finally come true. He led the Washington Capitals to the 2018 Stanley Cup Finals where they hoisted the Stanley Cup after 5 games and Ovechkin was named MVP. He’s a lock for the Hall of Fame but he needed a Cup win to cement his legacy amongst hockey’s greatest players, and he got that.

Last night, Ovi and Caps goalie Braden Holtby were guests on The Tonight Show Starring Jimmy Fallon where they invited Jimmy to drink from Lord Stanley’s Cup along with jockey Mike Smith who last weekend won the Triple Crown of Horse Racing aboard Justified. The drinking from the Stanley Cup portion of the interview comes in the latter half of the video below but you get to see Ovi open up about his life, career, and everything before that. You don’t often get see these all-stars talk so earnestly about success so it’s pretty cool to see Ovechkin open up like this:

I’m not a Caps fan so I guess it’s not terribly surprising that I never heard the story about Braden Holtby going on a 20-game unbeaten streak after he first played guitar in the pre-practice warmups but that’s a pretty fun piece of hockey trivia. Now that HQ Trivia has launched HQ Sports that feels like a piece of information you might want to commit to memory.