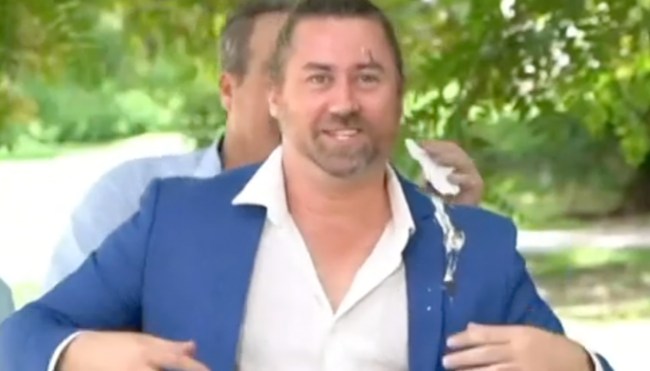 In 2013, a sign language interpreter at Nelson Mandela’s funeral garnered a fair amount of attention when people who are fluent in sign language revealed he was making random gestures that translated to absolute gibberish.

Since then, we’ve been treated to a number of actual sign language interpreters who’ve managed to become the center of attention for some much better reasons, like the woman who absolutely killed it after being tasked with signing the lyrics to “WAP” and arguably upstaged Megan Thee Stallion at Lollapalooza last summer.

Now, an interpreter who was covering a press conference in Australia has gone viral courtesy of the crappy fate he befell while doing his job courtesy of an owl that decided to, um, drop in at the worst possible time.

According to 1News, Mikey Webb was translating the comments of Deputy Premier Steven Miles during a gathering concerning recent flooding in Queensland when a different type of deluge suddenly dropped down from the trees above.

Poop. It was poop.

Nothing stops our fabulous Mikey.

By the way, it was an owl 🦉 pic.twitter.com/QPiqai5JSx

Webb handled the incident about as well as anyone in that kind of situation could, as he took off his jacket, wiped off his face with the handkerchief a nearby police officer handed him, and promptly resumed his duties.

That right there is the mark of a true professional.