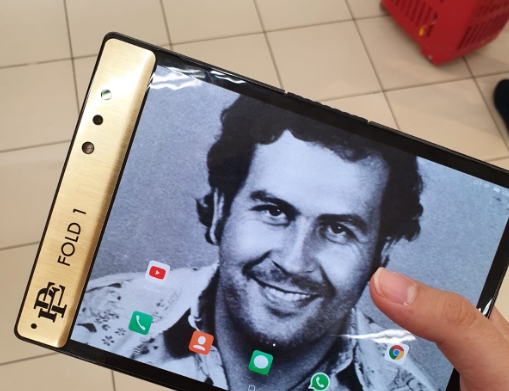 Watch out Samsung and Apple, there is a new smartphone player in town, and he means business. The brother of drug kingpin Pablo Escobar has released his own phone that is foldable and unbreakable. Some scientific studies say phones are as addictive as cocaine, so you can double or triple that sentiment for the Escobar phone.

Roberto Escobar released a foldable smartphone called the “Escobar Fold 1.” The brother of Pablo Escobar unveiled the Escobar Fold 1 with the help of attractive models in lingerie. This ain’t your father’s cell phone company, it’s quite literally a cell phone company of the brother of the infamous Colombian drug lord who had a net worth of $60 billion as the leader of the Medellín Cartel that murdered thousands of people.

“I have told many people that I would beat Apple and I will. I cut the networks and retailers, to sell to customers phones that can fold for only $349, phones which in stores cost thousands of dollars by Samsung and others,” Escobar told Digital Trends. “This is my goal, to beat Apple, and by doing it myself like I always have.”

The brother of the infamous drug lord also is taking the war right to Apple.

“They are scammers, and now we are preparing the class-action lawsuit,” Escobar said. “They are cheating the people and selling worthless phones to consumers, overpriced. My lawyers have been ready for long time, but before I sue them and give money back to the people which they deserve, I wanted to show them that my product is much better. On January 6 of next year, 2020, the $30 billion class-action lawsuit will be filed in the courts of California of America. We want Apple to give some of their illegal profits back to the people. I will make sure of it. I have spent almost $1 million just on lawyers to begin this lawsuit.”

Roberto is also suing Netflix for the streaming giant’s original series Narcos for $1 billion for coming too close to Pablo Escobar’s life.

So what does this phone have inside? The unlocked folding phone boasts an Octa-Core 2.8Ghz Qualcomm Snapdragon 8 CPU and runs on Android 9.0 operating system. The Escobar Fold 1 offers dual cameras at 16 and 20 megapixels and a flexible 7.8-inch AMOLED FHD+ screen when unfolded. The phone from Escobar Inc. can support two SIM cards.

“My phone cannot break, because I did not have to make a glass screen like Samsung,” Escobar claims. “Our screen is made of a special type of plastic, and we still have the best resolution. Our special plastic is very difficult to break.”

“Folding is nice, but also, we have special security on the phone. This makes it very difficult for anyone to scan the phone both [for] near-person communications like Bluetooth, and also for governments to access the devices,” Escobar alleges.

You have to believe that an Escobar brother is very, very concerned about having a secure connection.

“I will not say that it is 100% secure, but what I will say is that all other phones like Apple and Samsung are 100% open to all governments in the world. We are not,” Escobar added. “Also, the cover that comes with all phones has a thin layer of metal that blocks RFID and other communications. This is a lot of phone for a small price, but this is, like I say, thanks to us selling direct to customers without any middlemen.”

There will be 100,000 Escobar Fold 1 phones made in its initial run from the Escobar Inc. website.

You may remember Roberto Escobar from other extraordinary ideas such as his flamethrower that he alleges inspired Elon Musk’s Not a Flamethrower.