Pancho Claus: Houston’s Version Of Santa Claus That Enters Your Home Through The Bathroom Window 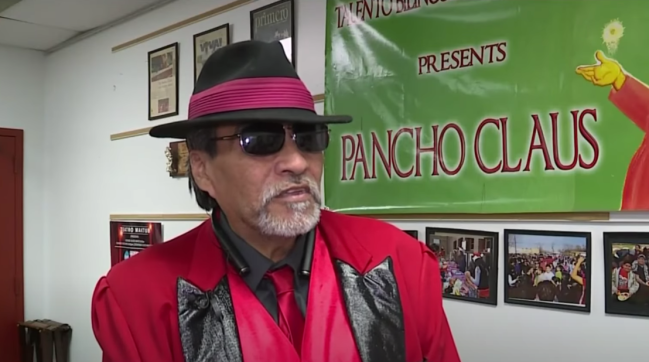 For pretty much every kid on the planet, Santa Claus is the man. He’s got a pretty great reputation as the guy that comes to visit on Christmas Eve that leaves you gifts. He’s one of the most iconic figures in history with the red suit, white beard, and giant gut nobody seems to be worried about. For some kids, however, he’s not the only joyful guy that spreads Christmas cheer.

In Houston, Texas, that position belongs to none other than Pancho Claus.

Unless you live in Houston, you’ve probably never heard of Pancho Claus, but he’s been a part of Christmas in Texas since 1981. Instead of a sleigh, he rides around in a 1972 Cadillac El Dorado. Instead of a red coat, he wears a zoot suit with sunglasses. You can also forget coming down the chimney, Pancho comes into your home through the bathroom window.

Back in 1981, Houston native Richard Reyes was asked to write a play about Pancho who was a folklore figure in the 1970’s following the Chicano civil rights movement. Reyes decided to write his play based on ‘Twas The Night Before Christmas” but with a more urban vibe. From there, the legend was fully born as Reyes became the Pancho Claus.

Reyes had a passion for art and working with at-risk youth, so for him, this was the best of both worlds. Pancho Claus makes appearances at schools, hospitals, and lower-income neighborhoods to give out gifts supplied by sponsors. ABC 7 estimated that he gives out about 10,000 gifts per year.

While Santa’s big day is Christmas Eve, Pancho Claus makes his presence known on Christmas Day where he’ll go around neighborhoods handing out gifts with his group of lowriders and police escorts.

Reyes has been able to continue his good work despite unfortunately suffering three heart attacks in recent years. The pandemic has also made things a bit more difficult for Pancho Claus in 2020, but all signs point to him to make an appearance in his zoot suit during drive-thrus this Christmas.