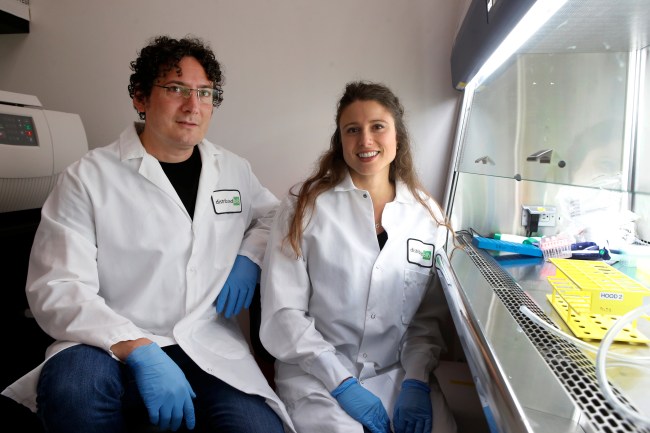 If you thought 2020 was off to a weird start already, a guy nicknamed Curly Jungle Jake who makes Screech Powers look like A.C. Slater could be the biggest sex symbol on the planet before the New Year’s Eve ball drops.

That’s right, folks. Curly Jungle Jake could be the man who digs us out of the biggest pickle of our time.

Jungle Jake, born Dr. Jacob Glanville (not to be confused with Superbad’s Steven Glansberg), is a San Francisco doctor featured in the Netflix documentary Pandemic and runs the biotech company Distributed Bio.

He and his team are working around the clock to find a medical solution for the Tom Hanks Disease and Monday, announced he believes they’ve found a “candidate cure” for one.

“We are happy to announce we have completed the engineering and we have some very potent antibodies that can be effective against the virus,” Dr. Glanville added.

In an interview with CBS 8, Glanville, who’s biography page proves he is no slouch, provided details on the alleged breakthrough.

How did you come up with this potential cure?

We took a series of five antibodies from around 2002 that were able to neutralize SARS. We were able to use technology in our laboratories to evolve those antibodies against SARS to adapt them to recognize COVID-19.

We tried with five different antibodies because we weren’t sure which one would work the best. All five worked so we have a pretty powerful tool chest available to us right now to produce a final therapeutic.

It is believed that the virus is a “cousin of the old SARS” so Glanville and his team created “hundreds of millions of versions” of antibodies for that virus, “mutated them a bit, and in that pool of mutated versions, we found versions that cross them over,” the New York Post reports.

The antibodies will be sent to the US Army Medical Research Institute of Infectious Diseases for safety and tox characterization before being the ultimate step of being used on human patients.

Pending good results – [if] we see the drug is safe and helpful means we could start releasing it for compassionate use in September.

The world’s eyes are on you, Glanville. And your co-founder on the pic at the top of this article. Give her my number so we can link up in September.