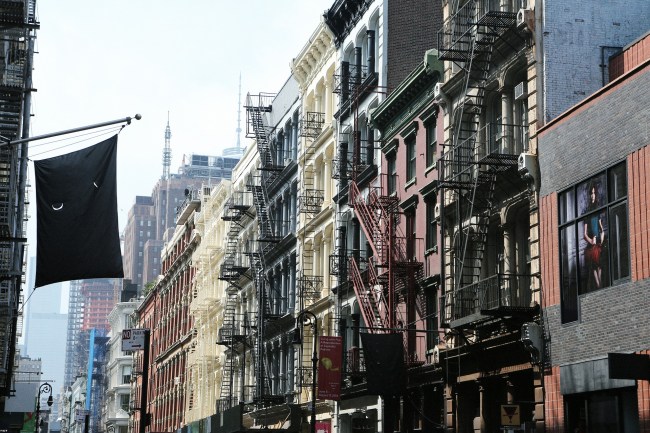 For the entire month of April, at least once a day I found myself thinking back to my second year in NYC after college when my best friend and I had to find a random roommate off of Craigslist to fill an empty room after our third friend took a job in Philly and had to move. The Craigslist Roomie™ seemed so normal when he came by to check the place out and meet us, but within hours of moving in we realized there was something really off with this guy.

I constantly found myself thinking about all of the New Yorkers going through similar situations during city-wide stay-at-home orders. And that’s the worst-case scenario. Trapped with a total stranger during the worst of times. I guess the best-case scenario is being stuck at home with your family or closest friends/roommates and even that is too much for some people to handle.

The app Globe is more or less an hourly version fo Airbnb. Instead of renting a place for multiple nights, you are renting it for a few hours. At any other point in history, the practical use of this app would be a quick romantic rendezvous, a tryst that you were trying to keep under wraps by getting in and out with the quickness. But these days, according to a profile in the New York Times, the Globe app is exploding with people using it to escape their loved ones for a few hours of peace and silence.

For many Americans, there has been no going to the office. No going out to lunch. No drinks with friends or colleagues after work. It’s the same people, day after day, week after week, month after month. The Times profile shows people are desperate for some alone time:

Brittney Gwynn, 32, has been quarantining in Brooklyn with her boyfriend and really needed a break. “Our love is unlimited but in terms of the time we’re spending together, we’re getting on each other’s nerves,” she said.
Ms. Gwynn, a project manager for an online art company, had learned about Globe last fall when she was looking for a place for her and friends to get ready for a fancy after-work gala. More recently, as the days of quarantine wore on, she kept an eye on the app to see if any place within walking distance to her apartment became available. When a vacant apartment in a Downtown Brooklyn high-rise was listed, she booked it for two hours, paying $100.
…
…
Oliver Page, 27, used Globe for the first time last month, after idling on a wait list for two months. An entrepreneur in Miami Beach, Mr. Page said he needed a break from his cousin. “We’re business partners, we’re living in a small apartment together, we’re like coronavirus husbands at this point,” he said.
…
..
“ ‘I have a bunch of roommates,’ ‘I don’t have a desk,’ ‘I want to go somewhere to bang out that core call,’ ” says Bamfo, running through reasons customers cite for needing some fresh, unoccupied square footage. He also cites, as additional examples, mothers who need a quick break from work and childcare, yogis who want to exercise privately and, during Ramadan, observant Muslims who needed space to pray. (via)

Given the current global health crisis, there are extreme cleaning requirements between the hourly rentals to the point that one person told the Post they could smell the powerful chemicals in the empty apartment.

While I fully understand the practicality of the Globe app at this point in history I have trouble understanding what it would be used for 12 months from now. Some people need a space fo focus, to work, to nap, to exercise, or just be alone for a few minutes. I get that, but….

In college, I studied abroad in Panama hoping to complete my Major’s required Minor. I just needed one more Spanish class, a Spanish literature class. I assumed FSU Panama would be the perfect place to do that. Well, I showed up and I was the only person enrolled in the class so they canceled it and I instead took ‘Human Sexuality’ where it was a class full of me and six women learning about all aspects of sexuality.

We once spent three hours (the class was only Tuesday-Thursday) discussing the orgasm. It was a weird class. We also took field trips and on one night we used an FSU school van to go around the city and chat with sex workers. Prostitution is legal and regulated in Panama and one of the primary places these meetings take place is at a ‘Push Button’. Picture a garage where you go up, press a button, the garage door opens and your car drives in, the door then closes to shield your car from the outside world (excellent for politicians) and there’s a hotel room inside that you can rent by the hour. That’s literally all I can think about with this Globe App. In hindsight, that was the strangest academic night of my life.

It might be a cool way to host poker games or parties in the future and hit up new apartments/houses instead of playing at your same friend’s house every week but really, this is all headed towards the ‘Push Button’ model I mentioned above, isn’t it?

For more on how this Globe app startup got going, you can click here to read the full profile in the Times.