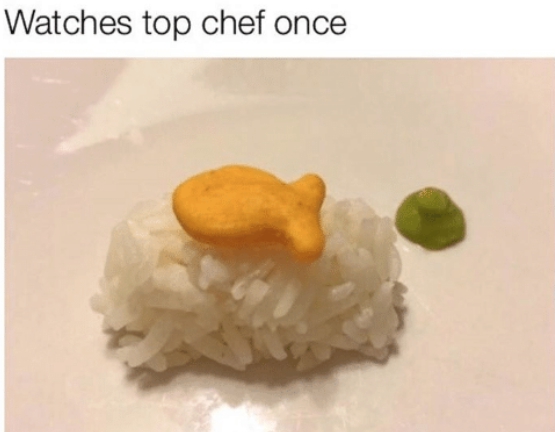 We all have that friend who was born with a silver spoon. Always had money for food, was equipped with a gas card from his rents, had a dope apartment right out of college even though he was just an intern. You know the guy, and if you don’t, you’re the guy. And on behalf of us dudes who are so poor we can’t even pay attention, we resent you.

For the rest of us, we’ve likely all been in a place when it’s Tuesday and payday is Friday and we have to decide between a subway pass and dinner. But this births a culinary creativity in us that allows us to sustain and survive.

Redditor Timcwalker posed the question, what was your poorest meal? The inquiry has garnered thousands of comments from people who have been in a tight spot and had to swallow their pride before a nice gulp of hotdog water. Here are the finest responses…

Wiener water soup. Saved the water from boiling wieners for hot dogs. Heated it up later and added some crackers.

A single cold hotdog (no bun, just dog) and salsa. My dad was dirt poor when I was younger and that’s all he had. Couldn’t even warm up the hotdog because the electricity was shut off.

My husbands grandma told us once about her favorite depression era food; “milk toast”. Make toast, pour milk on top of it to make it soggy, sprinkle of sugar. Like disgusting soggy French toast.

She loves it to this day.

I used to buy those dried Ramen containers where you just add hot water. There was a time during my 20s when I ate instant Ramen about five times per week for close to a year.

In my second year of university I was so broke around Christmas time that I bought bread and 2 packs of hotdogs to eat for 2 weeks so that I could afford enough food for my cat.

Grew up dirt poor in a third world country. There were days when we all we had to eat were tiny balls of rice dipped in salt or fish sauce.

Onion sandwich. I’d cut the onion into a “patty” and add a slice of American cheese. Actually acquired a taste for them and whip one up once and awhile if the wife’s not around.

Spaghetti noodles and butter. I had that for about a week straight until my next paycheck came in. I jazzed it up with a little salt and pepper.

I was flat broke to the point where I literally didn’t have a penny to my name. I had to make it through 5 more days till my loan installment came in and all I had in the cupboard was pasta and ketchup. So i lived off the most budget pasta bolognese possible for the rest of the week.

Check out the entire thread here.