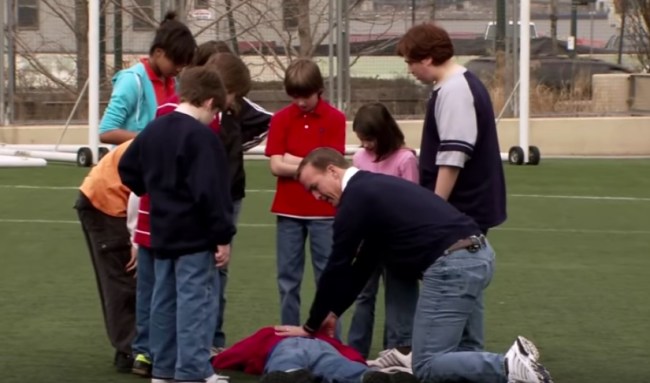 If there is a defining moment that will solidify Peyton Manning’s legacy for generations to come, it’s not his two Super Bowl wins, or five NFL MVPs, or dropping his balls on a trainer at Tennessee. It most certainly will be his objectively hilarious United Way SNL skit he starred in in March of 2007.

I watched it again today as a refresher and I laughed at loud at this stuffy, self-important Brooklyn coffee shop. I advise you to watch it too.

The 42-year-old Manning was the keynote speaker at an Indianapolis Colts event at the JW Marriott in Indy Wednesday and dished on a variety of topics–Andrew Luck, 45-year-old Adam Vinatieri still in the league, and which player hit him the hardest during his 18-year NFL career.

But most importantly, he regaled the tale of how the universally lauded SNL skit almost didn’t happen because he initially wasn’t comfortable with how aggressive it was. Check it out below.

We did this one skit that people ask me a lot about. We did this spoof for the United Way, and we were throwing footballs at these kids, which doesn’t sound very good. Those footballs were Nerf footballs, a Nerf cutout, and were light as a feather, and they put in these sound effects where it looks like you’re knocking these kids out. I remember the director said, ‘Peyton, you’re a charitable guy, this is why it’s going to be funny. And it’s only going to work if you’re all in, and you whack these kids right in the head.’ And I kept saying my mother is going to be so disappointed.

These kids were all child actors, and their parents were out there watching the whole time, and it was all very awkward and uncomfortable.  So I finally told the director, ‘I can’t do it, I can’t do it. I’ll go up to the edge, but this feels over the edge. I’m not comfortable.’ And he said no problem we don’t have to do it, we don’t wanna make you do something out of your comfort zone. And right then, I cannot make this up, one of the parents of the child actors runs out onto the set and tells the director, ‘I want him to hit my kid in the face!’ I said I will do it. I will knock your kid out.

As far as which defensive player hit him the hardest, it shouldn’t come as a surprise.

I’d say the guy that hit me the hardest, and unfortunately the most often, just went into the Hall of Fame last month was Ray Lewis of the Baltimore Ravens. When he retired it was like the greatest day of my life. I sent flowers to his press conference (that read), ‘Stay retired. Don’t pull a Favre. Don’t come back.’

He was so instinctive, and always felt like he was one step ahead. He studied film like a quarterback. Seemed like every time he hit me, it was kinda like he’d drive me into the ground. And it’s kinda like he would use me to help him get up, and he’d whisper in my ear, “I’ll be back in a couple of minutes.”

I played in 12 Pro Bowls with Ray Lewis, were on the same team representing the AFC. And I was not over there relaxing. I was over there working. I was buying him dinner, and drinks, I bought him golf clubs one year. Kinda hoping he might not hit me as hard the next October, but he never seemed to remember.

All I want for Christmas is a Peyton Manning SNL United Way Part II.