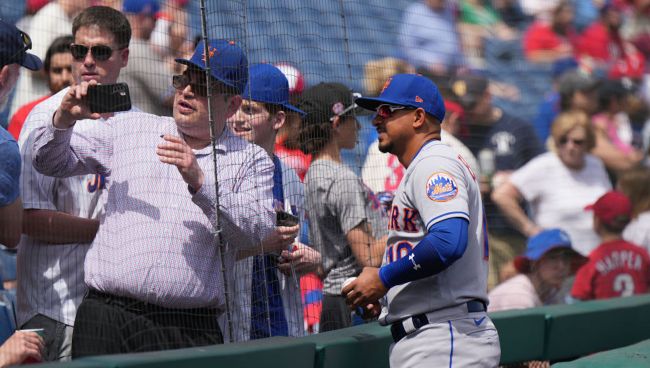 Don’t look now but seven games into the 2022 season and the New York Mets are in first place in the National League East with a record of 5-2. And that’s without the services of future Hall of Fame pitcher Jacob deGrom. The Amazins are back, baby!

JUST KIDDING. Looking like a competent team early in the season only to brutally collapse later is basically the Mets’ specialty at this point. Just look back at last year, when they lead the NL East heading into the All-Star Break before falling apart in the back half of the season and failing to qualify for the postseason entirely.

This Mets fan soaking up Wednesday afteroons’s game at Citizen’s Bank Park obviously isn’t well aware of Mets’ history, though, as he was WAY too arrogant during the team’s 9-6 victory over the Phils and paid the price for it.

While taking a video to celebrate the Mets’ dub, the fan then turned his camera on disgruntled Phillies fans, which then led to one of them snatching the phone and launching it onto the field.

From the phone being thrown to the face painted fan to the accent at the end.

Despite the fact that math isn’t my strong suit, combine the price of the tickets, drinks, hot dogs, and a new cell phone, and this Mets fan could be looking at a half-a-grand trip to the ballpark. Hopefully, the social media clout was worth it.

The Mets’ 2022 season will resume when they play in their home-opener at Citi Field against the Arizona Diamondbacks on Friday at 1:10 p.m.

RELATED: Alec Bohm, Who Plays In Philadelphia For The Phillies, Digs Own Grave And Says He “F’n Hates” Philadelphia