Alec Bohm, Who Plays In Philadelphia, Digs Own Grave And Says He “F’n Hates” Philadelphia 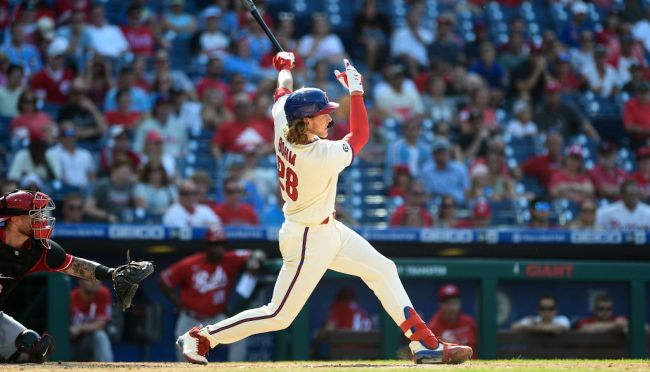 Philadelphia Phillies’ third baseman Alec Bohm got himself into some hot water with his own fan base after he was caught on camera saying “I f–king hate this place.” Bohm made the comment after the Phillies crowd sarcastically cheered him for making a routine play at third base against the team’s rivals, the New York Mets.

Alec Bohm confirms postgame that he said "I fucking hate this place" when fans sarcastically cheered after he made a play pic.twitter.com/I0IdZ0lEn9

Following the Phillies’ 5-4 comeback victory over the New York Mets on Monday night, Bohm issued an apology to fans of the team and the city:

“I said it. Do I mean it? No,” Bohm said. “It’s a frustrating night for me, obviously. Made a few mistakes in the field. Look, these people, these fans, they just want to win. You heard it, we come back, they’re great. I’m just sorry to them. I don’t mean that.”

"Emotions got the best of me… Do I mean it? No." pic.twitter.com/QKzMWAoDwB

"Emotions got the best of me… Do I mean it? No." pic.twitter.com/QKzMWAoDwB

While having a go at the fans is always a bold move — just look at what happened to Francisco Lindor, Javy Baez, and Kevin Pillar last season in New York City — doing so in Philadelphia, arguably the most notoriously prickly sports town in the country, is especially brave.

Last season in Philly, his second in the major leagues, Bohm hit for a .278 average with seven home runs and 47 RBIs. He better pick those numbers up or else I have a feeling the fans may turn on him even more. We wish you good fortune in the wars to come, Alec.

RELATED: Phillies Fan Who Has Been Sunbathing In Same Spot At Spring Training For Two Straight Days Is Goals