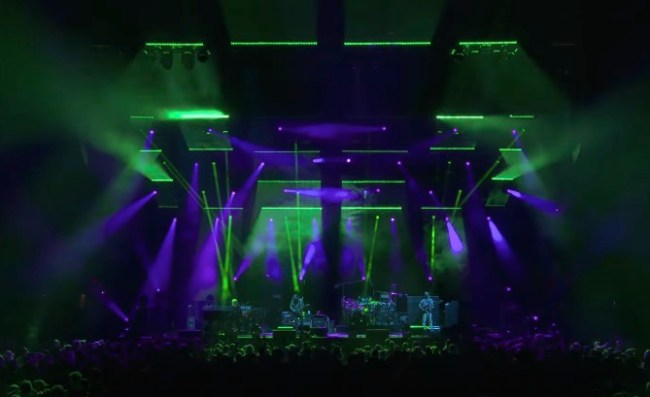 Phish is on tour, slaying their way across America this summer. Maybe that’s not important to you, but it’s important to me – especially because they’re off to a spicy start.

As you know, we enjoy ourselves some Phish here at BroBible.

So I’m going to check in every now and then here on the site to share 2021 Phish tour highlights.

I hope that’s OK with all of you.

With three shows under their belt, Phish has now clocked in two 20+ minute jams:

A sublime “Carini” at Oak Mountain in Alabama on July 30th. It starts dark and evil and ends blissfully. It’s a jam that has the capacity to scare the sh*t out of you and make the prickly hairs stand up on the back of your neck, particularly when Trey throttles it into overdrive. I just adore it when he does those trance-y, vibrato overtones on the Languedoc. No idea what pedal makes that sound, but it’s the best.

Because the good folks at Phish Inc. love us and want us to be happy, you can enjoy it for free on YouTube, embedded below.

A “Chalk Dust Torture” for the record books, on a steamy Saturday night in Alpharetta, Georgia.

At 26:33, this is the second-longest Chalk Dust Torture in Phish history.  That’s saying something considering that CDT has been played approximately 480 times over the last 38 years, at some 25% of all recorded Phish shows.

Best of all, it features Trey doing a hand signal for jam BLAST OFF. It signals a stage when the rocket boosters that thrust this jam into orbit leave the spacecraft; the exact moment we go from stratosphere to mesosphere and we start to lose our sense of musical gravity.

Check it out. It’s such a perfectly serendipitous gesture for us Phish dorks to nerd out over.

The hand signal for “it’s time for this jam to take off”. CDT Alpharetta, GA. 7.31.21 #phish #treyanastasio pic.twitter.com/FedoXralNp

Sonically, a great Phish jam is what I imagine deep space travel must be like if deep space travel for humans was such a thing. I’m just a dipshit blogger simpleton who bangs words on a MacBook keyboard for money, but it’s fun to imagine yourself *inside* a Phish jam, traversing bizarre extraterrestrial worlds and the boundaries of space and time in an interstellar vehicle. It’s the fantasy of sci-fi, as music.

That’s why this Chalk Dust Torture is so great. It’s not of this world. It transcends. It’s a wild spectrum of emotions – a sense of foreboding, a sense of melancholy, a sense of ecstasy. All the things about the astral Phish experience that feel analogous to space travel. Trans-spectral, multi-dimensional – a turbo-charged Chevy Camero for the multiverse. Trey switches on the envelope filter for some screaming funk noises around the 20-minute mark before going deep space. Even though it has to end, you’re grateful that it went to a happy place that’s indescribable thanks to the constraints of human vocabulary.

It drains your cache of feel-good brain chemicals for all the right reasons and leaves you coming back for more.

It’s also important to note that it teases Fire by the Ohio Players. It’s almost certainly unintentional, but it’s hard to not miss the major-chord “I Know You Rider” jam at 15:20.

I hope you enjoy it as much as I do.

If you didn’t, just yell at me on Twitter instead. I won’t mind.