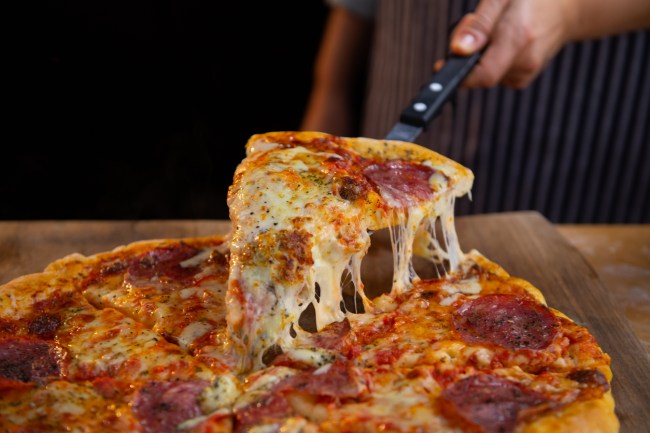 New Jersey gets a bad reputation (Thanks Jersey Shore), but the Garden State has a few things going for it. N.J. has Joe Pesci, pumping your own gas, pork roll egg and cheese, and fantastic pizza. New Jersey is so proud of their pizza that they have declared their state to be the pizza capital of the world.

Sunday, February 9th, is National Pizza Day, and when you think of the carbohydratey slice of heaven that is pizza, you either think of New York City or Naples, Italy, the birthplace of pizza (Nobody of sound mind considers Chicago as the best pizza on the planet). New Jersey says fuhgeddaboud NYC and Italy, because they believe they’re numba one when it comes to pizza.

The official Twitter account for the state of New Jersey proclaimed that they are “THE PIZZA CAPITAL OF THE WORLD.”

this sunday
in honor of #NationalPizzaDay
we will be declaring

NEW JERSEY: THE PIZZA CAPITAL OF THE WORLD

Peter Genovese, a food columnist for NJ.com, confirmed that New Jersey is the best for pizza. “As the person who has eaten at more NJ pizzerias than anyone on earth, I support this message,” Genovese tweeted.

As the person who has eaten at more NJ pizzerias than anyone on earth, I support this message

Relax, New Jersey. I will proudly proclaim Crimped Hair Day, Wearing Socks With Sandals Day, and Don't Pump Your Own Gas Day in your honor. But Connecticut is clearly the Pizza Capital of the World. https://t.co/ccvhWopjuD https://t.co/xNCqq9ba81

New Jersey has been quite boastful as of late, less than a month ago, NJ declaring itself the “Bagel Capital of the World.” This is also probably correct, and is going to piss off a lot of New Yorkers.

bagel capital of the world #NationalBagelDay

The NYPD account chimed in to say that “New Jersey is canceled,” but NJ told the cops to “stick to donuts.”

Anthony Bourdain, who grew up in New Jersey, proclaimed that the best cheesesteak in the country isn’t in Philly, but in New Jersey.

Also, pineapple does not belong on pizza.