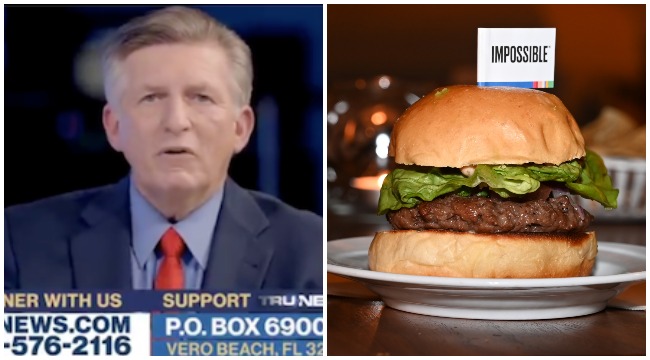 As a society, we have not found a cure for cancer, or mechanical ACL for athletes, or a more pleasurable substitute for a condom, but we are relishing in the age of meatless meat.

Plant-based patties like Impossible Burger are now available at 9,000 locations nationwide, and chains like Red Robin and White Castle are already reporting shortages of the cell-based burgers. Impossible Foods told Yahoo Finance it has seen 50% sales growth since the launch of its new 2.0 burger in January and sales in Asia have skyrocket by four times in the past three months alone.

Chrissy Teigen called the Impossible Burger “more flavorful than meat” and celebrities like Katy Perry, Serena Williams, Jay-Z and Trevor Noah were all part of the latest $300 million round of funding for the fast-growing plant-based burger company.

The impossible burger is absolutely out of this world. That is not meat. pic.twitter.com/HOILVEVi7s

Companies like Impossible Foods aims to provide people with the taste and nutritional value of meat and dairy without the adverse health and environmental affects associated with livestock products.

the impossible burger with mayo and cheese at universal is the best burger i’ve ever had in my life ever and if i had to eat one every day for the rest of my life…..i would

@ImpossibleFoods you have a new impossible burger fan! That was awesome and wouldn’t have known a difference if I didn’t order it. pic.twitter.com/QH4J2s5gbh

One man who is not sold on the hype is radio host and founder of TruNews, the site organization that described President Obama as a “demon from hell.”

Please listen to his conspiracy theory about Impossible Burger.

Rick Wiles is warning you not to eat an Impossible Burger because they are part of a satanic plot to change human DNA and "create a race of soulless creatures on this planet.” pic.twitter.com/1w2ffOWcAP

For anyone with a brain, it’s totally easy to find the bridge between a plant-based meal and the creation of a race of soulless creatures. STAY WOKE!

The creatures on this planet are already soulless, now they will just be well-fed. Hail Satan and his miracles!