Who Are The Pointer Brothers? Meet TikTok’s Dynamic Duo Handshaking And Dancing Bad Vibes Away 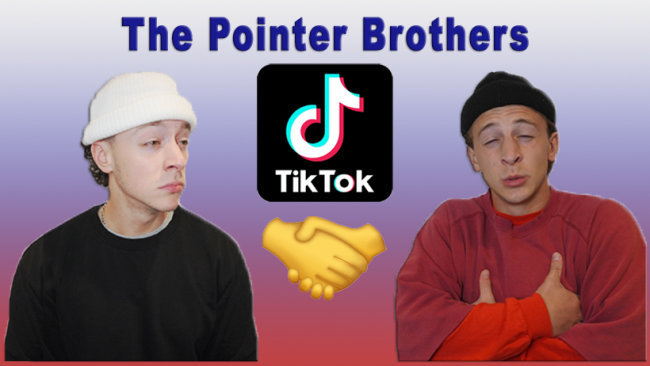 With more than half of a million followers on TikTok, the Boston bros make their fans laugh with well-timed awkward moments, hilarious handshakes and incredible dance moves. They love beanies, pointing, and one another.

It didn’t take long for the Pointer Brothers to find success on the app. They posted their first video on March 9, 2020 and went viral just over a month later with this heart-wrenching story of a basketball prodigy who’s career was cut short due to injury. It drew 268.2k views.

Over the next few weeks, the Henry and Mike posted videos to the tune of around 20k views per video. They dressed up like album covers, celebrated the 4th of July like Thomas Jefferson, chucked darts, and shared their brother-to-brother telepathy.

In August 2020, the brothers posted a video that changed everything and shared the ‘Top 5 handshakes to do w/ the homies.’ The pointing began.

What do you guys call that last one??#fyp #handshake #homies #casual #xyzbca #foryou

The intentionally uncomfortable video gained about 250k views and sparked a series that took off.

After posting their first handshake tutorial, it was Part 2 that went bananas and earned 7.8 million views. The creativity is unmatched and the rest of the series is just as funny as, if not funnier than, the one before.

PART 5 IS LIVE. Thank you all for 25k! Check the comments for GIVEAWAY🚨 What’s your fav handshake? #jokes #handshakes #bubblegum #foryou

THANKS FOR 100K🚨 Which one should’ve made the cut?? #jokes #handshakes #softserve

After finding success on TikTok with their incredible handshakes for homies, the Pointer Bros took their handshakes to other places. Like the basketball court, baseball diamond and the soccer field, for example.

Reply to @25jadyn26 Rumor has it, FIFA will be incorporating these into their future video games 😳 Who’s doing the Shnitzel!?? #jokes #handshakes

Reply to @yezzzurrrr which one you hitting during the 7th inning stretch? #jokes #handshakes

They also shared the best handshakes for ghosts, after you max lift, and at Thanksgiving.

spooky season is upon us 👻 dropped some HEAT with these. LMK if y’all need a Witch’s Stew tutorial 👀

p bros are BACK. need y’all to break this one out in the gym #jokes #handshakes #lbs #foryou

The crocs stay ON during dinner. We know y’all lying if your not doing 3 on thanksgiving #handshakes #turkeyday #foodcoma

Henry and Mike aren’t just handshake extraordinaires. They are quite funny with everything they do and don’t hold back. Like this fight turned dance party.

And this fake college admissions reveal.

waited so long for this moment… #college #decisionday

♬ How to Save a Life – The Fray

How to greet the homies.

Similar to the handshake series on which they found so much success, Henry and Mike started greeting one another in humorous ways. The top hits garnered over three million views.

Reply to @kjbeeeee had to recap. PART 6 SOON 🤝😈 which ones should’ve made the cut? #homiestok #buffettok

Wow, they can really dance.

Most recently, the Pointer Brothers have been teaching some sweet dance moves. Next time you’re at a function and the music hits, try out some of these moves:

♬ How Deep Is Your Love – Calvin Harris & Disciples

Taking it off of the Tok.

After finding success on TikTok, Henry and Mike took their talents to other social media platforms.

Their YouTube channel ‘The Pointer Brothers’ features pranks, Q&As and short films. In addition to their original content on YouTube, they combined their biggest TikTok hits with a social setting.

On their Instagram page @thepointerbrothers_, the dynamic duo supplements their TikTok hits with an inside look at their day to day lives. No matter where you find them, it’s impossible not to smile at their antics. Check out their website here.