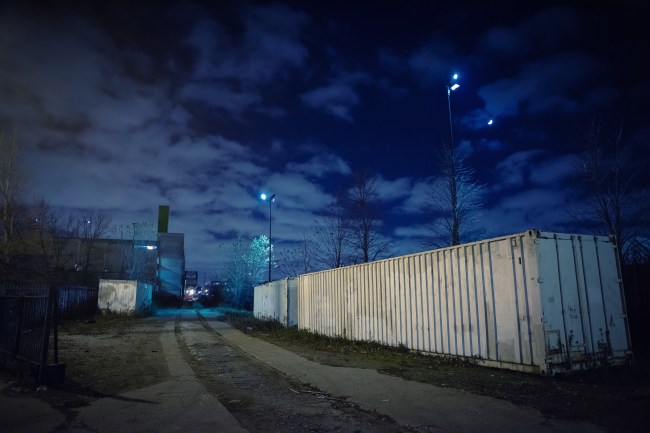 After everything that 2020 has thrown our way, Hollywood is going to need to really dig deep on their next round of Horror films because reality has gotten pretty darn terrifying these days.

Police in The Netherlands raided a site at Wouwse Plantage after acting on intelligence. They were able to tap into the encrypted EncroChat network in an investigation beginning back in April. According to CNN, EncroChat is “a “criminal marketplace” used by 60,000 people worldwide” and it’s used worldwide to coordinate the sale of illicit goods, launder money, and plot murders.

During the raid, Dutch police arrested six men who are suspected of Kidnapping and Hostage Taking and they found six shipping containers that had been converted into makeshift prison cells and torture chambers. One of these torture chambers has soundproof walls, torture devices like pruning shears and loppers, and handcuffs on the ceiling and floor to chain someone standing up.

As if the existence of that room isn’t terrifying enough, another torture room had a dental chair and bags full of additional torture devices. The reporter from CNN sounds like a real-life Horror film. Something I’d expect to see if the Saw and Taken franchises were to collaborate like Alien vs. Predator.

“In each of the cells, handcuffs were attached to the ceiling and floor, in order to be able to chain someone standing up with their arms raised,” the statement said. “The rooms were finished with noise isolating panels and heat-insulating foil.”
One of the units also contained a dental chair, with straps for feet and arms. “The sea container with the dental chair contained bags with objects that were presumably intended to torture or at least put pressure on victims,” the statement added.

“The police found, among other things, pruning shears, loppers, a branch saw, scalpels, pliers, extra handcuffs, fingercuffs, tape, balaclavas, and black cotton bags that can be pulled over the head. During a search at a home in Rotterdam, 24 kilos of MDMA was also found.”
The containers were also fitted with cameras for remote monitoring.
Officers also found three stolen delivery vans, two BMWs, seven handguns and a Chinese variant of the AK-47. “In total, 25 weapons were found with the suspects,” the National Prosecutor’s Office said. (via CNN)

A MAJOR silver lining here is after police were able to gain access to the encrypted EncroChat back in April they were able to track the criminal group’s plans and movements, identify potential kidnapping and torture victims and alert them so they could go into hiding. They prevented some unimaginably horrific crimes from taking place.

Authorities say the investigation began in April, during which officers were able to access an encrypted chat network — EncroChat — to track the group’s movements and plans. “From this it could be deduced who the intended victims were,” the statement said.
“They were warned by the police and went into hiding elsewhere. As a result, and thanks to permanent CCTV surveillance in and near the warehouse, planned kidnappings, hostage-taking and other serious violent crimes were prevented.” (via CNN)

I’d like to think that I can find some small sense of safety given that this didn’t take place in the United States but just knowing for a fact this exists somewhere in the world right now leads me to assume this isn’t an isolated incident and these torture chambers can be found elsewhere and that’s just one more horrifying thought to keep me up at night now.

According to the report, all six men who were arrested in the raid are from The Netherlands. I’m not sure what to make of that news and I’m sure we’ll all learn A LOT more about this developing story in the coming months. For now, you can head on over to the full article on CNN to learn more.