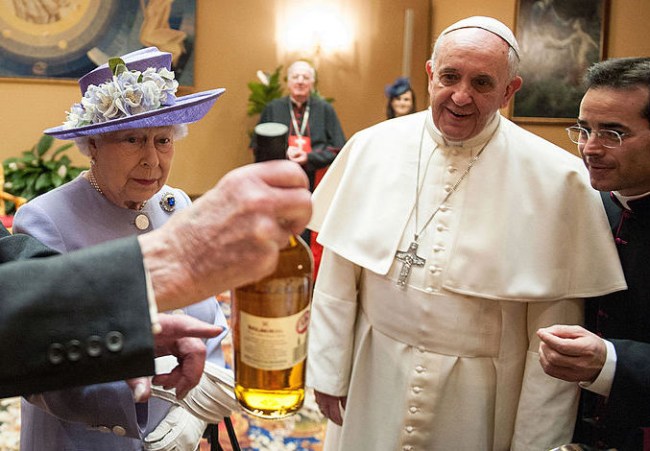 Based on my last name and devotion to Boston-area sports teams, you probably won’t be shocked to learn I got the full Irish-Catholic Experience when I was growing up, which involves being unable to name all of your cousins off of the top of your head, rooting for Notre Dame even though neither of your parents went there, and going through the first couple of decades of life saddled with existential guilt.

Everyone has their own stance on religion and the world is still waiting for the day when a productive discussion about the topic can take place on the internet, and as a result, I’m not here to debate its various merits and many pitfalls.

However, I did go to college on a campus populated by Jesuits—a group of priests who have a bit of a reputation for being the rebellious bad boys of the Catholic Church—and while there, I actually had some pretty compelling conversations about various aspects of theology with guys who all shared two common loves: God and copious amounts of scotch.

In order to become a Jesuit, you have to take a vow of poverty but it appears there’s some sort of loophole that allows you to always have a bottle of Lagavulin 16 on hand and an unspoken agreement with the Lord that it’s not a real pour unless it’s at least three fingers.

In 2013, the Jesuits finally got their big break when Pope Francis became the first member of the order to ascend to the throne in Vatican City much to the chagrin of a number of more conservative worshippers who were seemingly worried “The Cool Pope” (presumably premiering soon on HBO) would roll out onto the balcony overlooking St. Peter’s Square rocking a leather jacket and a toothpick in his mouth.

A couple of years ago, Francis gained some points in my book when he gave Pappy Van Winkle 23 the respect it deserves, and after doing a little digging, I discovered he’s actually a pretty big Scotch guy.

However, it appears other officials at The Vatican don’t share the same enthusiasm for a good dram that he does, as The Scottish Daily Record reports a filmmaker working on an upcoming documentary was instructed to remove a clip where Francis dubbed a bottle of Oban 14 “the real holy water” after he received it as a gift from students at a seminary hailing from the land where it’s produced.

As I discovered when I did a bit of a deep dive into the various whiskeys of the world, Francis is simply expressing a view that has been held for centuries, as the Latin phrase used to describe distilled alcohol in the Middle Ages—aqua vitae—translates to “water of life,” which morphed into the Gaelic word “uisge” that inspired the English term we use today.

To borrow a phrase from Billy Madison: if whiskey is holy, consider me the Church of the Holy Sepulchre.