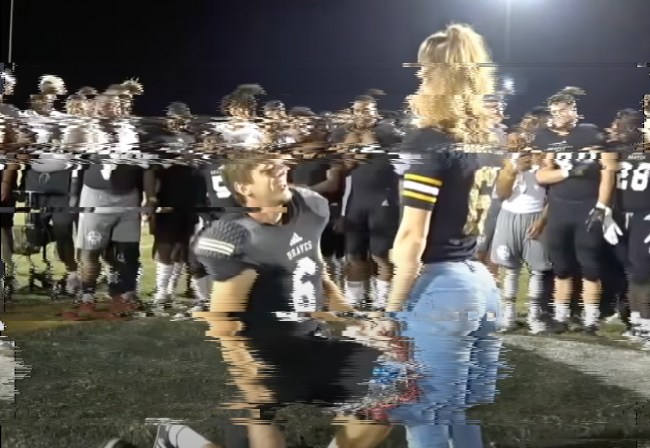 Far be it for me to yuck on someone’s yum—especially in the realm of true love—but the culture has fetishized post-game marriage proposals and we must render them extinct before it’s too late.

The topic was thrust back into the zeitgeist this week after a Florida State lineman inexplicably dropped down on one knee to propose to his girlfriend in the midst of the opposing team celebrating an embarrassing upset win.

FSU player proposing on the field with Jacksonville St still celebrating in the background. You can’t make this stuff up pic.twitter.com/jeC5GZ45gz

Her: OMG YES! Can we celebrate at our favorite French restaurant?

Him: Uh, well, I have to go get naked with four dozen other guys first, then I’ll have to account for our awful protection to irritated beat reporters, then coach will likely belittle us for an hour. But after that, we can hit the Taco Bell 24-hour drive-thru. On me!

Her: I think we should see other people.

If you think I’m being unnecessarily critical, try to imagine your loved one appreciating a proposal under these circumstances.

Your job is a hindrance to the relationship. A roadblock. You miss all the important holidays with her family because of your obligations and she has to DVR 90 Day Fiancé because coach is running your ragged for losing to a team in the Ohio Valley Conference.

Around 53 Of Your Friends

The key word there is “your.” Despite the story you’re telling yourself, she probably doesn’t like your friends. She’s likely made one or two friends of their girlfriends, which makes group dates tolerable, but not enough to share the happiest moment of her like with your friend Todd.

Why do the rest of us have to throw on a collared shirt, three squirts of Abercrombie Fierce and wait until sunset but these dudes are out here in blood-stained uniforms raining in their jock straps and we still classify this as romance? Ba-hum-bug!

With all that said, this may be the greatest proposal in the history of proposals. I am not married to this take.