Scientists Brought Worms Frozen In Permafrost For 42,000 Years Back To Life And This Is How Our Existence Ends 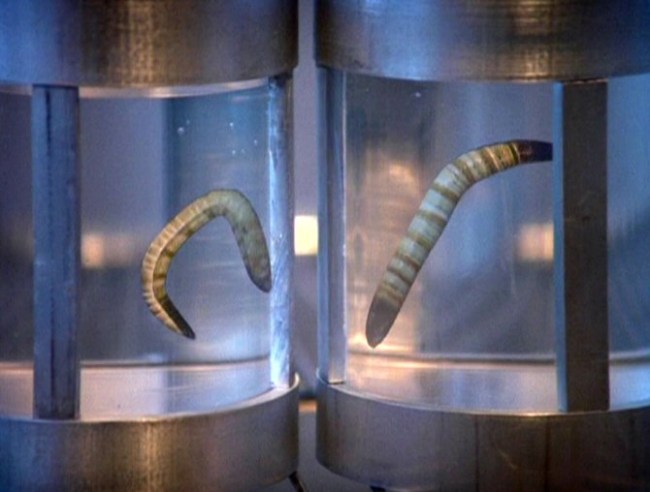 Full Disclosure: The worms seen above are not the 42,000-year-old worms that were recently discovered in real life, but rather worms that were featured in the 1993 episode of the X-Files TV show titled “Ice” that had parasitic ice worms found in Alaska that burrowed in people’s brains and controlled their violent behavior. Could the same thing happen with these real-life prehistoric worms? Maybe we really don’t want to know the answer to that question.

We take you to Russia where scientists claim that worms that were found frozen in permafrost that is approximately 41,700 years have come back to life. About 300 nematodes, or roundworms, were found frozen and since been revived by scientists. Two of the roundworms have come back to life, slithering and eating like it was 39,682 BC all over again. Imagine how refreshed you’d be after a 42,000-year nap?

Of the two reanimated worms, one was found at about 11-feet underground near the Alazeya River in 2015 and the other worm was found in 2002 in a fossil rodent burrow near the Kolyma River, about 100-feet underground. The Pleistocene creatures were stored at -4 degrees Fahrenheit in a laboratory then gradually warmed up to 68 degrees over several weeks where they were reanimated. DID NONE OF THESE SCIENTISTS WATCH TREMORS: A COLD DAY IN HELL?!?!?

“Thus, our data demonstrate the ability of multicellular organisms to survive long-term (tens of thousands of years) cryobiosis under the conditions of natural cryoconservation,” the researchers said in a study published in Doklady Biological Sciences. So there’s hope that we could bring Ted Williams’ head back to life?

There’s speculation by critics that the radiocarbon-dated samples are 40,000-years-old, but possibly the organisms are not nearly as old. The Russian scientists speculate that thawing of the soil could not happen at the depths that they were found. This is it. This is how humans are exterminated. It won’t be a nuclear war, climate change, or AI that kills us, it will be reincarnated prehistoric worms.