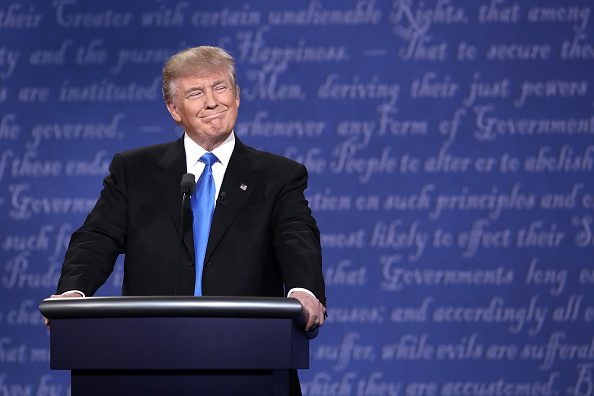 How excited are people for the final season of Game of Thrones? Everyone is so amped up for the HBO fantasy TV show that the President of the United States announced critical sanctions that have major geopolitical ramification with a Game of Thrones-inspired poster. On Friday afternoon, President Donald Trump announced that the United States would impose debilitating sanctions against Iran with a Game of Thones-esque poster on Twitter dot-com.

The United States has launched a campaign of economic pressure to deny the regime the funds it needs to advance its bloody agenda! https://t.co/0yuYgpvq5i

President @realDonaldTrump is reimposing all sanctions lifted under the unacceptable Iran deal. The U.S. is reimposing the toughest sanctions ever on Iran, targeting many of the corrupt regime’s critical sectors.

The reactions to the President of the United States using the iconic font and catchphrase of a fantasy series where there are dragons, snow zombies, people who can warg into birds, and demons who are shadow-birthed varied from anger to laughs to funny memes.

Maisie Williams AKA Arya Stark replied to Trump’s tweet by saying, “Not today,” a reference to her mentor Syrio Forel.

Sophie Turner, who plays Sansa Stark, had this reaction to the President’s tweet.

Other reactions from the internet.

It appears the governing of the United States has changed from a reality TV show into a fantasy TV show. https://t.co/bUoNRwJoqu

HBO responded to the President’s Game of Thrones tweet by saying, “We were not aware of this messaging and would prefer our trademark not be misappropriated for political purposes,” HBO said in response to a tweet from Trump earlier Friday.

“We were not aware of this messaging and would prefer our trademark not be misappropriated for political purposes.”

How do you say trademark misuse in Dothraki?

HBO did not have any problems handing over Season 6 of Game of Thrones when then-President Barack Obama asked to watch it early. “When the commander-in-chief says, ‘I want to see advanced episodes,’ what are you gonna do?” producer David Benioff said.

“Yes. He’s the leader of the free world,” producer Dan Weiss said of Obama’s request. “I think, for both of us, finding out the President wanted advanced copies of the episodes was an ‘ah-ha’ moment,” Weiss continued. “That was a very strange moment.”

RELATED: 6’9″ Hafþór Júlíus Björnsson AKA The Mountain From ‘Game Of Thrones’ Married His 5’2″ Girlfriend