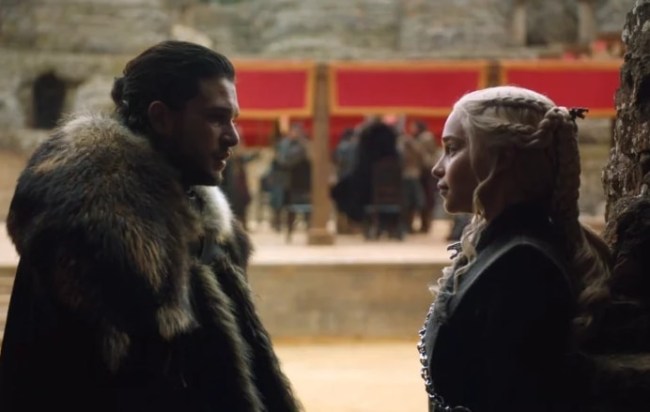 We are still at least six months away from the start of Season 8 of Game of Thrones. But today we received some noteworthy news about the final season of the hit HBO fantasy series including the first official photo from the final season.

HBO and Entertainment Weekly released the first official photo from Game of Thrones Season 8 and it shows Daenerys Targaryen and Jon Snow looking having a tender embrace, almost like very close-knit family members.

The first official photo from #GameOfThrones’ final season is here! Get exclusive details on the most impossible finale in TV history in our report from the #GoT set: https://t.co/wjWGa4K2Yr pic.twitter.com/59aFZkCR0U

Tyrion Lannister must not be appreciating this pic and his jealousy may ignite a deadly betrayal.

Speaking of Tyrion, he commented on how amazing the last season will be. “There are no better writers in television than [showrunners] Dan Weiss and David Benioff. They ended it brilliantly. Better than I could have imagined and you people are in for it,” Dinklage told EW. “It ends beautifully for my character whether it be tragic or not.”

The latest speculation suggests that GoT returns as soon as April or early summer of 2019. There will be six episodes and they cost $15 million per episode.

RELATED: 6’9″ Hafþór Júlíus Björnsson AKA The Mountain From ‘Game Of Thrones’ Married His 5’2″ Girlfriend

Entertainment Weekly also got some details as to the first episode of Season 8. According to EW, the opening scene for Season 8 will start off much like it did in the first episode of Season 1. There will be a royal procession strolling into Winterfell, but instead of King Robert Baratheon and crew, it will be Queen Daenerys Targaryen arriving and rolling deep with her dragons, Dothraki horde, as well as Jon Snow, who we know is also royalty, but nobody knows it yet except for Bran and Samwell.

“What follows is a thrilling and tense intermingling of characters — some of whom have never previously met, many who have messy histories — as they all prepare to face the inevitable invasion of the Army of the Dead,” states EW.

“It’s about all of these disparate characters coming together to face a common enemy, dealing with their own past, and defining the person they want to be in the face of certain death,” co-executive producer Bryan Cogman told Entertainment Weekly. “It’s an incredibly emotional haunting bittersweet final season and I think it honors very much what [author George R.R. Martin] set out to do — which is flipping this kind of story on its head.”

Here is another possibility of the first episode of the final season of Game of Thrones.

RELATED: Sophie Turner Reveals That The Ending Of ‘Game Of Thrones’ Will Be ‘Disappointing’ To Many