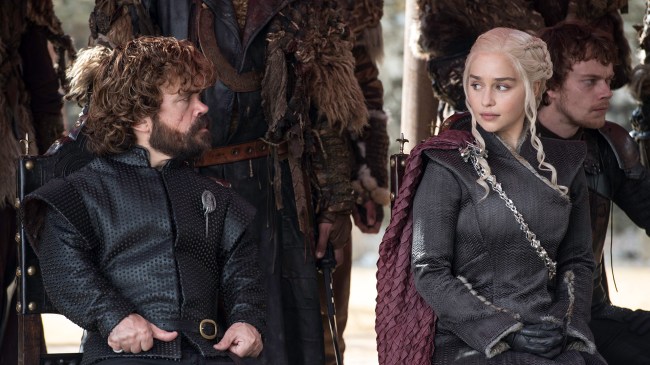 You can see it in Tyrion Lannster’s eyes, he has a massive crush on Daenerys Targaryen. While he is currently the Hand of the Queen to Daenerys, he definitely wants to dedicate other body parts to the Queen. I’m talking about heart of course. He wants to be the “Heart of the Queen.” Sickos. Now it’s official, Peter Dinklage revealed that Tyrion is in love with the Dragon Queen.

When we last saw Tyrion and Khaleesi of the Great Grass Sea in the Season 7 finale of Game of Thrones, they were on a boat. That’s when Dany and Jon Snow bumped nasties as Bran Stark narrated on how Jon is actually Aegon Targaryen. Meaning that Daenerys Targaryen is his aunt.

Unfortunately for Jon and Dany, they didn’t hang a “If This Boat Is A Rockin’, Don’t Come A Knockin'” sign on the door. So Tyrion snuck into the hallway and lurked outside their pleasure room listening to the sounds of lovemaking from the unholy union. So was Tyrion just being a perv or was he devastated that Daenerys was getting six inches of Snow? According to Peter Dinklage, the actor who plays the lovable Imp, Tyrion is in love with the Mother of Dragons.

“It’s complicated. . . . A lot of the time with Tyrion, it’s professional and personal,” Dinklage told Entertainment Weekly. Obviously, he has feelings for Daenerys. He loves her—or thinks he does.”

“She’s awe-inspiring. He’s questioning that because he doesn’t have a good track record for falling in love,” the actor said.

Ain’t that the truth!

When Tyrion was 16, he met a wheelwright’s daughter named Tysha on the road, apparently the victim of an attempted rape. While his brother Jaime ran off the attackers, Tyrion helped Tysha recover from the ordeal, and they became lovers. They found a drunken, wandering septon willing to marry them and briefly, they lived as husband and wife. That is, until Lord Tywin learned what had happened. Jaime confessed that he organized the incident to make his brother happy, and Tysha was actually a prostitute. As a lesson, Tywin gave Tysha to his guards, paying her a silver coin for each man and forcing Tyrion to watch. By the end, there were so many silver coins that they were running out of her hands onto the ground. Tyrion has reciprocated Tywin’s hatred ever since.

RELATED: First Official ‘Game Of Thrones’ Final Season Footage Released! Let’s Overanalyze The Hell Out Of It!
Then there was that time Tyrion found his ex-girlfriend Shae in his father’s bed. Awkward. He then strangled her to death and promptly killed his father.

“He loves Jon Snow, too,” Dinklage added. “They’re the two people he has the most in common with, in a way — they’re both outsiders in their own families who have refused to follow the path their family has taken, and hopefully for the better. He’s wondering how smart of a move [Jon and Dany getting romantically involved is], because passion and politics don’t mix well. He knows the two of them getting together could be very dangerous.”

Tyrion definitely has the hots for Dany, that’s why he advises Khaleesi to banish Jorah from Mereen and to never come near her again. Which left Jorah heartbroken.

Tyrion also advises Daenerys to leave her lover, Daario, behind in Essos as they travel to Westeros. Even Daario respected the cockblock by the Imp.

Will Tyrion’s jealousy turn into betrayal? Or will he try to cockblock Jon from getting with his love? Or will he even have to cockblock since Bran is going to tell Jon that he just sexed up his aunt? Whichever way this goes down in the final season of Game of Thrones, you know damn well that somebody is gonna die.