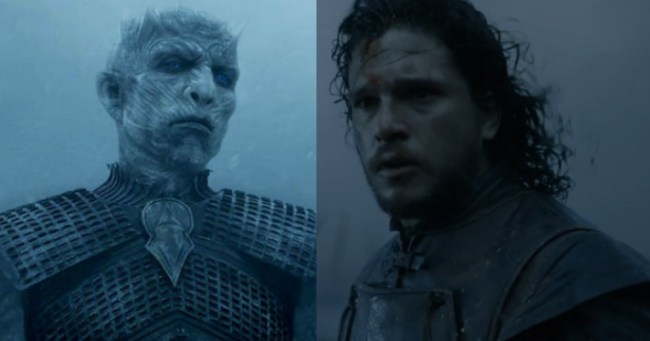 We’re still months and months away from the final season of Game of Thrones hitting our screens when it debuts in the first half of 2019. So while we anxiously await, we might as well bide our time with juicy fan theories of how Game of Thrones could end.

There’s already been a theory as to how Cersei Lannister will suffer a cold demise. Now there’s an intriguing fan theory of how Jon Snow will come face to face with the Night King and how he will make the ultimate sacrifice to defeat the leader of the White Walkers.

Jon Snow and the Night King have a bit of history and they made their first acquaintance in Season 5 at the end of the eighth episode titled “Hardhome.”

These two powerful characters will certainly reunite in the final season and there is a theory that in order to defeat the Night King, Jon Snow must become the Night King. Redditor AnghkoR_ explains this saucy fan theory.

Someone has to ‘pull out’ the dragonglass in his chest which was used to create him in the first place. By doing this the Night King would ‘die,’ but unlike what happens when someone kills a ‘normal’ white walker, none of the creatures the Night king ‘created’ or turned would die. Instead they would lose the mind controlling effect the Night King has on them, and they would start doing whatever the f*ck they want, i.e. rampaging around the country. To prevent this scenario from happening someone has to take the place of the Night King by stabbing himself with the previously extracted dragonglass-dagger. By doing this the person (in our mind Jon Snow) would sacrifice himself for the greater good, gaining control over all of the wights and walkers. He then would lead them back over the wall back into the north where they would stay like it has been before since the last long night (like a beast in a cage).

You may recall that back in Episode 5 of Season 6, Bran had a vision of how the Children of the Forest created the Night King thousands of years ago even before the first Long Night by plunging a shard of dragonglass into his chest.

RELATED: ‘Game Of Thrones’ Questions Answered: Who’s Alive, Is It An Ice Dragon And How Big Is The Army Of The Dead?

So how would this tie in together with the previous Azor Ahai mentioned in Tales. Well in our mind the same scenario we have now in the series, has happened before. Which is known as the Long Night. At that time the Childen of the Forest and the First Men united and managed to extract the dragonglass-dagger as mentioned above, Azor Ahai then sacrificed himself (stabbing himself with the dagger) to gain control. After he became the “new” Night King he was still conscious about himself(who he was, he still had his personality) so he, the Children of the Forest and the First Men build the Wall in union (The Night King using Ice and maybe even using the undead as help , the Childen enchanting it with protection and the First Men building Castles and installing the Nights Watch). After that the Night King secluded himself far in the North where noone else could survive. Now over time ( in the many years since the long night) the personality of the former Azor Ahai slowly began to decay and he finally turned into what we see now in the series as the Night King. At some point the vanishing personality of Azor Ahai could no longer hold in check the “evil” that was lingering inside him. At that point the Night King started moving again, returning from the far North and slowly started creating new white walkers / wights as he had before.

Could the seemingly one good, pure character in Game of Thrones be forced to become the villain? We’re talking about George RR Martin here, of course he would torture us with such an agonizing end for the one hero of the hit HBO TV show. But Jon’s sacrifice would be consistent with the many other times that he made a completely selfless act for the good of everyone else in Westeros. This would be an utterly bittersweet ending for Jon Snow and Game of Thrones fans.