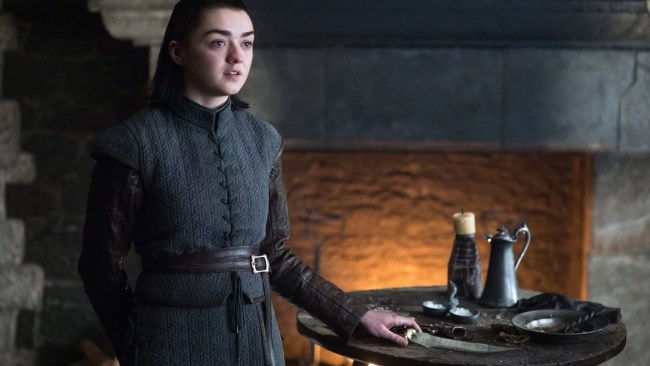 The last day of filming Season 8 of Game of Thrones was on Friday. This is the end of filming of the cherished fantasy TV series because this is the final season. Filming is done forever. Maisie Williams posted a proper Game of Thrones sendoff on her Instagram that was gory and so appropriate for the brutal show.

goodbye belfast. goodbye arya. goodbye game of thrones. what a joy i’ve had. here’s to the adventures to come #lastwomanstanding #barely #immasleepforthenextfouryears #justkiddingidontsleep

The pic makes bloody sense. But hold on, let’s look closely at Maisie’s caption to the photo: “goodbye belfast. goodbye arya. goodbye game of thrones. what a joy i’ve had. here’s to the adventures to come #lastwomanstanding #barely #immasleepforthenextfouryears #justkiddingidontsleep.” What does #lastwomanstanding mean? Did Maisie just post a giant Season 8 spoiler? Does that mean that it is Arya Stark sitting on the Iron Throne when it all ends? Does Arya Stark survive the White Walker apocalypse, but Sansa Stark and Daenerys Targaryen die?

To add more intrigue to the “Arya Stark wins the game of thrones” conspiracy theory, actress Lena Headey AKA Cersei Lannister commented on the photo with “QUEEN” followed by a crown. 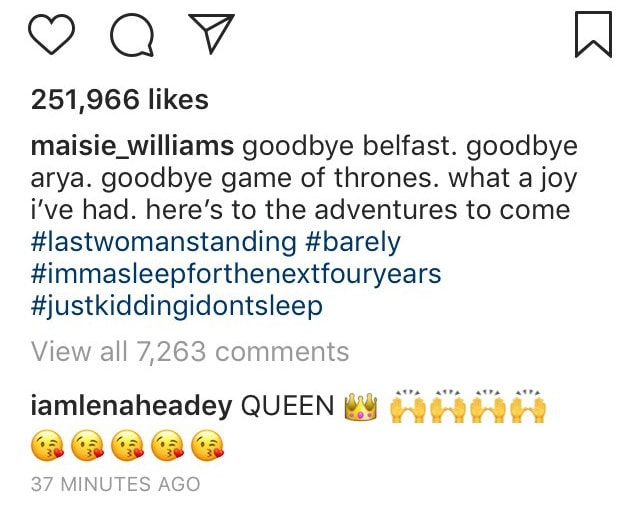 Of course, these spoilers could be nothing at all. Williams might mean she was the last woman standing on the set. And Headey could just be calling Maisie a “queen” in the friendly Broad City kind of way. Or maybe these are being used for misdirection. We have a long way to go because the final six episodes of Game of Thrones don’t arrive until sometime in 2019. In the meantime, check out these sweet Game of Thrones-themed adidas sneakers.