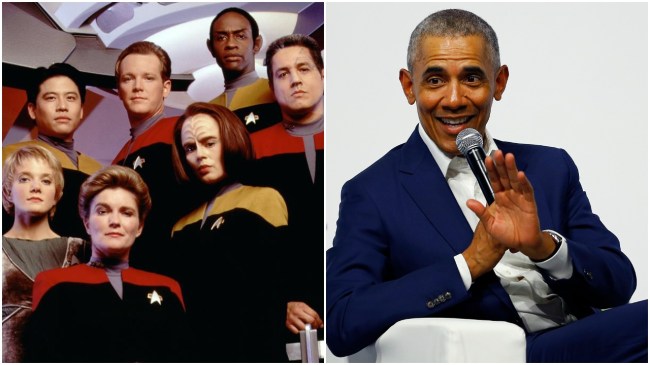 This is why Reddit is truly one of the most unique places on the internet: people are able to anonymously apply their extremely unique brand of intelligence to the most random of tasks.

Want to know how to get past that level on Red Dead 2? Reddit has an entire minute-by-minute breakdown. Trying to figure out if you’re the asshole in the relationship? There’s a Subreddit for that! Curious about some of life’s most serendipitous examples of the Domino effect? Yup, Reddit.

And that last example, that’s not just something I spewed off the top of my head, it’s an actual post in r/AskReddit and the results are truly stunning, particularly one involving Star Trek and the former leader of the free world, President Barack Obama.

According to Reddit user (and possible savant genius) IAmNotScottBakula, it is, in fact, the shoddy writing of the 1990’s television series Stark Trek: Voyager that the 44th President of the United States has to thank for his election victory.

Star Trek: Voyager was not as well received as previous Star Trek series. In 1997, producers decided to add a new character in an attempt to boost ratings. Actress Jeri Ryan was brought in to play Seven of Nine. Jeri’s frequent separations from her husband, Jack Ryan, due to her acting schedule contributed to their decision to divorce in 1999.

In 2004, Jack Ryan became the Republican nominee for an open Senate seat in Illinois. During the campaign, the proceedings from Ryan’s divorce became public, and contained details of his sex life that did not make him look good.

Sounds patently insane, I know. But you know what Mark Twain once said about the truth? It’s stranger than fiction.