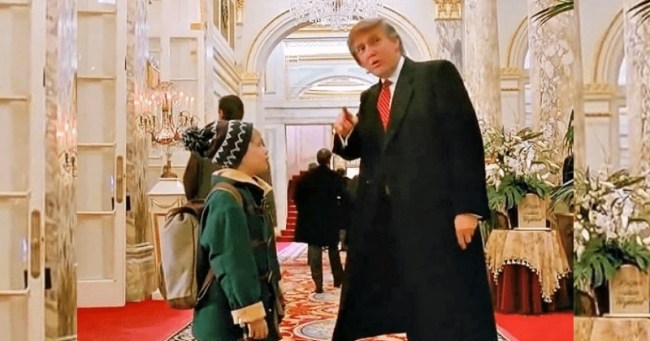 Canada’s state-run TV deleted President Donald Trump from a Christmas showing of the movie Home Alone 2. President Trump’s brief cameo in the 1992 holiday-themed comedy was purposely edited out by the Canadian Broadcast Company (CBC), in what many believe is a politically motivated move.

CBC viewers noticed that President Trump was notably missing from his popular cameo. Back when Donald Trump was a New York City socialite and real estate tycoon, he appeared in Home Alone 2 as himself. Trump helps Macaulay Culkin’s character, Kevin McCallister, find the lobby of the Plaza Hotel after he is separated from his family.

Watch how they cut Trump out of Home Alone. This is 1984 level pic.twitter.com/xkJaVfTWYg

The CBC said that the President of the United States was edited out of the movie not because they were triggered by the mere sight of Trump, but rather for time considerations. ComicBook.com asked the state-run TV why President Trump was deleted from the film and they responded by saying: “As is often the case with features adapted for television, Home Alone 2 was edited to allow for commercial time within the format.”

The CBC has issued a statement on the nontroversy by sating that “several” cuts made for time. “These edits were done in 2014 when we first acquired the film and before Mr. Trump was elected President.”

CBC responds to criticism that short scene featuring Donald Trump was deleted from movie Home Alone 2, which aired recently. Spokesperson says 'several' cuts made for time. 'These edits were done in 2014 when we first acquired the film and before Mr. Trump was elected president.'

No word on whether the CBC will erase Donald Trump from his appearance on The Fresh Prince of Bel-Air.

Coincidentally, Trump was asked about his role in Home Alone 2 by a U.S. soldier during a Christmas video call with troops serving overseas. A soldier asked the Commander in Chief if Home Alone 2 was his favorite Christmas movie, to which he laughingly replied, “Well, I’m in Home Alone 2.”

Trump added that “a lot of people mention” his cameo in the movie around the holidays. “Especially young kids. They say, ‘I just saw you in the movie.’ They don’t see me on television as much as they do in the movie. But it’s been a good movie, and I was a little bit younger, to put it mildly. And it was an honor to do it,” Trump said.

“It turned out to be a very big hit, obviously. It’s a big Christmas hit. One of the biggest,” the President said. “So, it’s an honor to be involved in something like that. You always like to see success.”