Social Media Is Rife With The Damage Rubber Bullets Have Done To People’s Faces And Bodies, Some Of Whom Weren’t Even Protesting 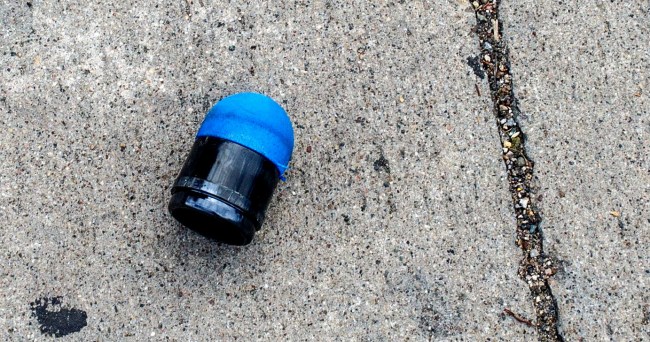 As protests have continued throughout the United States over the death of George Floyd in Minneapolis, law enforcement has used numerous weapons in an attempt to disperse and control looters and other rioters including tear gas, batons, and rubber bullets.

Unfortunately, many of those who have been targeted by police were reportedly doing nothing more than peacefully protesting.

When used improperly, the most dangerous of those non-lethal forms of crowd control are rubber bullets.

Rubber bullets intended use is to be fired from a distance at a person’s lower extremeties, typically leaving a bruise similar one might receive to being shot with a paintball gun at close range.

One of the problems that occurs with the use of rubber bullets is that they can ricochet uncontrollably and when directed at a person’s head can cause serious injury or even death.

Sadly, there have been many severe, and in some cases, permanent damage done to those involved and/or covering the protests over the past week.

One example, discussed in a recent article by The Cut, exemplifies what can go wrong if rubber bullets are not used properly.

On Friday, a journalist said it felt like her “face exploded” with a rush of blood after being hit by a rubber bullet in Minneapolis. She is now likely permanently blind in her left eye. Actor Kendrick Sampson said an LAPD officer pointed a gun directly at him before pelting him with rubber bullets and posted a video of another man who was rushed to the hospital after being shot in the face.

Linda Tirado, a freelance photographer struck in the face by a rubber bullet, said that she had lost her sight in one eye. In New York a British photographer said he was arrested and charged and spent a night in custody, in spite of his press credential https://t.co/b41BalWaca

Photojournalist Andre Mercharles, who says he was hit with rubber bullets twice while protesting in Minneapolis, said, “When you hear the word ‘rubber,’ you feel like, ‘Eh, it’s gonna bounce off and you might be in a little pain.’ But I’ve gotten hit by a baseball before and this is 100 times worse.”

Hey y'all ever see a rubber bullet? This is what Pittsburgh police fired at nonviolent peaceful protestors tonight, along with tear gas and flashbangs. No looting or vandalism had occurred, crowd was just chanting and holding signs. The cops fired first. #pittsburghprotest pic.twitter.com/WsvXzOzfgI

In another article, Dr. Jose Torradas, a spokesperson for the American College of Emergency Physicians, told Insider, “If you’re just firing off at close range, not really aiming for the lower limbs, you’re asking for trouble.”

A freelance photographer has captured the moment a policeman with a rubber bullet gun took aim at a man and a child during protests in California. Robert Grant said; "This is probably the most impactful picture I have ever taken."
📷: Richard Grant pic.twitter.com/b34V3X99Pv

A 2017 review of past research in BMJ Open looked at 1,984 people who had injuries from “kinetic impact projectiles,” which includes rubber bullets. It found that 53 of them died and 300 suffered permanent disability. Of those who survived, 71% had severe injuries.

“Given their inherent inaccuracy, potential for misuse, and associated health consequences of severe injury, disability and death, KIPs do not appear to be appropriate weapons for use in crowd-control settings,” the authors wrote. “There is an urgent need to establish international guidelines on the use of crowd-control weapons to prevent unnecessary injuries and deaths.”

The article goes on to state that if one fears being struck by a rubber bullet while protesting to “wear thick clothing, like denim or even leather, that doesn’t leave much skin exposed” including protective pads made for athletes, an athletic cup (for men), and goggles made with “ballistic grade glassware.”

Considering many of the photos protesters have been sharing on social media showing the damage these rubber bullets have caused, that seems like some wise advice.

WARNING: Some of the photos below may be jarring for certain people.

A rubber bullet would definitely fuck up your day pic.twitter.com/aqQKjYv906

Idk what I thought a rubber bullet looked like but it wasnt this… These hoe ass police officers shooting people in the FACE with these!!?? pic.twitter.com/6egFzatRcA

I just got hit by a rubber bullet near the bottom of my throat. I had just interviewed a man with my phone at 3rd and Pine and a police officer aimed and shot me in the throat, I saw the bullet bounce onto the street @LAist @kpcc OK, that’s one way to stop me, for a while pic.twitter.com/9C2u5KmscG

This is a Rubber Bullet and they’re aiming these at people’s faces pic.twitter.com/BEv3GnzL2U

Please help out my best friends girlfriend got shot in the face with a rubber bullet during a peaceful protest pls rt anything helps https://t.co/n2o7IU1Rzo pic.twitter.com/OS8WgS6mIi

Here’s Brandon who got shot by a cop, he lost his eye and half of his face is broken. He has another surgery to go. If you can please help him out too! ❤️pic.twitter.com/gMvLH4yNHf

PLEASE donate (if you can) and share the link …. she got shot by a rubber bullet by the police and she was PEACEFULLY at a protest! https://t.co/lEtTVp27F8

“cops wouldnt shoot you if you were being peaceful” pic.twitter.com/VBrGddaAd8

today i got shot by a cop with a rubber bullet and went to the ER only to be accompanied by many others with the same wounds. no one here was threatening the police. no one here was violent. no one here was doing anything but fighting for justice. we will keep fighting. stay safe pic.twitter.com/mYnNjn3r54