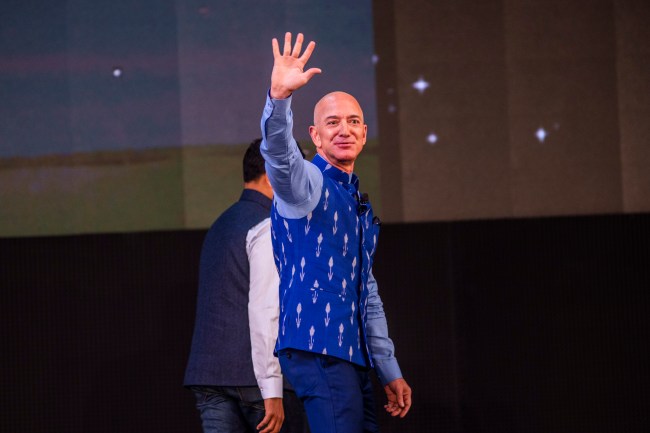 Protesters assembled outside of @JeffBezos's DC home have constructed a guillotine. pic.twitter.com/pDFcTg81K9

I don’t mean to be a guillotine snob, but that thing is a total piece of garbage. I wouldn’t know whether to decapitate a traitor or use it for a few sets of alternating dumbbell presses. Jesus christ, have some pride guys. Not a chance in hell that tiny little sail blade would actually sever Bezos’ massive head. You think that junky ‘tine is getting through THIS neck?

Please. You’d need to drop it 30 times. It would be like cutting through the bottom stalk of an asparagus with a spoon. More of a mushing than a beheading.

The entire point of the guillotine was to be able to execute people “humanely”—one swift cut and you’re gone.

History– The origins of the French guillotine date back to late-1789, when Dr. Joseph-Ignace Guillotin proposed that the French government adopt a gentler method of execution. Although he was personally opposed to capital punishment, Guillotin argued that decapitation by a lightning-quick machine would be more humane and egalitarian than sword and axe beheadings, which were often botched.

Needless to say, that guillotine is about as inhumane as they come. Robespierre is laughing in his grave.

Can’t imagine Beez is too bothered. Guy just hit $200 billion. You know what they say: with great wealth comes a group of protestors at your door, cobbling together the most ramshackle execution device ever made. A high school hockey player taking woodshop as a way of easing his course load would do a better job.

Welcome to the club Jeff… you’re the first (and only) one here.