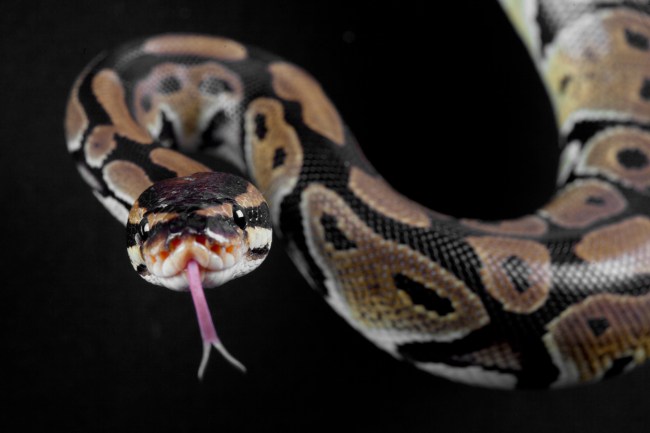 Two huge pythons crashed through a living room ceiling after fighting for the affection of a female snake. And people say chivalry is dead. The frightening situation took place in Australia because of course this happened in the Land of Nope, where the country’s main export is nightmare fuel.

David Tait returned to his home in Queensland to find a large part of his ceiling missing. After further inspection, the man discovered two very large pythons slithering around in his home. One python was in his living room and the other was in his bedroom. That will definitely put a damper on any romantic time that was planned for that evening.

“I’d been away from the night and came home to find most of the dining room ceiling on the table,” Tait said, according to Newsweek. “I found one snake in the bedroom and we found one in the lounge room.”

Tait called the local snake catcher to remove the uninvited house guests. It’s either call a snake catcher, immediately put your house up for sale or burn down your home.

One of the snakes was over 9 feet long and the other was more than 8 feet long. The pythons weighed in at an estimated combined weight of 100 pounds, as reported in the Associated Press. The snake catcher, Steven Brown, said that the pythons were “some of the biggest and fattest” he’d ever seen.

Carpet pythons can grow up to 12 feet in length, but most don’t exceed 8 feet. Carpet pythons are non-venomous. They suffocate their prey by constricting it and then swallow the animal whole.

Brown removed the two large reptiles from the home and relocated them about a half of a mile away. Brown said both snakes “did have a couple of strikes at me only because they were scared.” He shared photos of the damage on Facebook.

“Received a call to Laceys Creek after customer found 2 very large Coastal Carpet Pythons (Morelia spilota mcdowelli) in his house when he got home,” Brown wrote on the Facebook page for the Brisbane North Snake Catchers and Relocation. “Wasn’t till I got there that I found they had come crashing through the customers ceiling in the kitchen. One snake was located next to the front door and the other in a bedroom of the old country home.”

“I would assume that it was two males fighting over a female that was nearby in the roof,” Brown said. The snake catcher suspects that the female python could possibly slithering around above the ceiling. David Tait should have burned his house down.

“Mating season generally starts today [September 1], the first day of spring,” Brown said, according to Australia’s 7 News. “But I’ve been going to jobs with males in combat with females over the past month. That’s due to the warm winter we had.”

That had to be one charming female snake for two male snakes to brawl and be willing to crash ceilings for a chance to smash.

Shockingly, this is not the first time that a python crashed through a ceiling. Last November, a 10-foot-long python fell from above and dropped in to say “Hi” to unsuspecting workers at a spa in China. Animal experts said the snake may have been living in the ceiling for up to 10 years.

LOOK OUT BELOW: A python came crashing through the ceiling of a bank in southern China, landing at the feet of a group of employees who fled in horror.