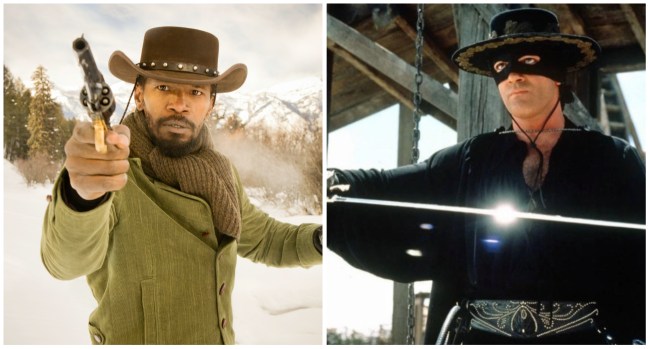 While Quentin Tarantino undoubtedly has a legendary filmography, he also has an infamous list of unmade projects attached to his legacy, too.

From Killers Crow to Kill Bill: Vol. 3 to his own take on Star Trek, Tarantino’s ever-growing list of unrealized projects has become so extensive over the decades that they now have their own page on Wikipedia.

Whoever those people are that update Wikipedia pages — thank you for your service, by the way — they’re going to have to add another film to Tarantino’s list of what-could’ve-beens, as stand-up comedian and writer Jerrod Carmichael recently revealed in an interview with GQ that he and Tarantino wrote a “Django meets Zorro” film together that he believes could make half-a-billion dollars at the box office.

“The Django meets Zorro project he was working on with Quentin Tarantino? Not happening, but ‘Quentin’s a lunatic who I love, and I’m happy that I got to spend the time. We saw exploitation flicks at the New Beverly, he read me scenes that never made it to his movies, that he had typed out, in his kitchen after making fresh-squeezed lemonade for me. It was really special. It’s actually an incredible, incredible script that came in from that Django/Zorro that I would love for Sony to figure out, but I realize the impossibility of it. But I still think we wrote a $500 million film.'” [via GQ]

According to Tarantino, there’s a real chance that his next feature film — which will be his tenth following Reservoir Dogs, Pulp Fiction, Jackie Brown, Kill Bill: Volume 1 & 2 (one movie), Death Proof, Inglourious Basterds, Django Unchained, The Hateful Eight, and Once Upon a Time in Hollywood — will also be his last.

Obviously, if that is the case, whatever project he does choose to do next could potentially have career-defining significance.