People Were Not Happy With Randy Moss Mocking A High School Player On ‘C’mon Man!’ 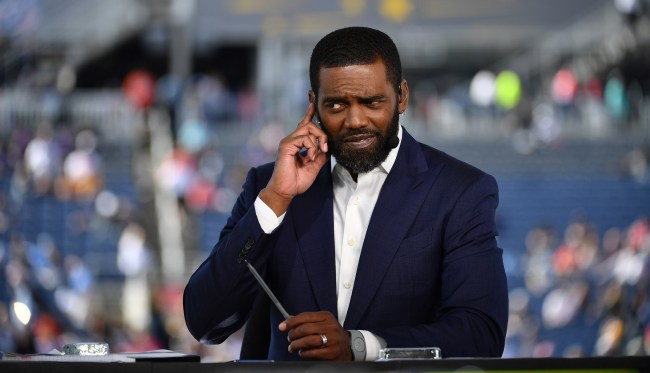 Viewers of ESPN’s Monday Night Countdown were not happy with former NFL star turned analyst Randy Moss after he made fun of a high school football player on the show’s popular weekly segment “C’mon Man!”

Many felt that it’s one thing to mock professional football players or even top level college football players because pros get paid, and both already perform on a national stage, and in most cases, on national television.

Yet they felt it’s a whole different ball of wax to take some random kid playing high school football and make fun of him on national television, by an NFL Hall of Famer no less.

Was there no other football player in the NFL or in college that Moss could have chosen outside of a high school player in the Arkansas state playoffs this week?

That poor kid, whose name Moss mentioned repeatedly, probably already is overloaded with grief and embarrassment after that play eliminated his team from the playoffs.

By the way, Moss isn’t the only one who should be getting criticized for making fun of a kid in high school on national television. After all, Moss wasn’t the one who put the video together and gave final approval over it being aired on ESPN.

The kid’s coach saw it and expressed his displeasure with Moss and ESPN on Twitter.

It’s disheartening to see @espn run a segment like this on a kid. I as HIS HEAD COACH take full responsibility. Any criticism needs to be directed towards me. @BladenFike is a tremendous young man with a bright future! Proud to be his coach! #FamilY

The young quarterback also saw it and showed real class with his response.

I took my eye off the clock. However, criticizing me off of one play does not define me as a Quarterback. I am much better than that! I love my team and my coaches! Thanks for having my back. #familY #PurpleReign @CdickC @RandyMoss https://t.co/Nfvl7wXYaE

Many others who saw the segement on ESPN were not so kind.

Agreed. High School is off limits.

Totally ridiculous. They owe that kid an apology

Of course, as always, there were many of these types of responses as well.

Jesus. Do you agree with participation trophies. Life is way harder than some ESPN segment.

Nah. He will forever say he was on ESPN Monday night football pregame. And Randy Moss talked about me.

This, however, was my favorite reaction to the whole thing.