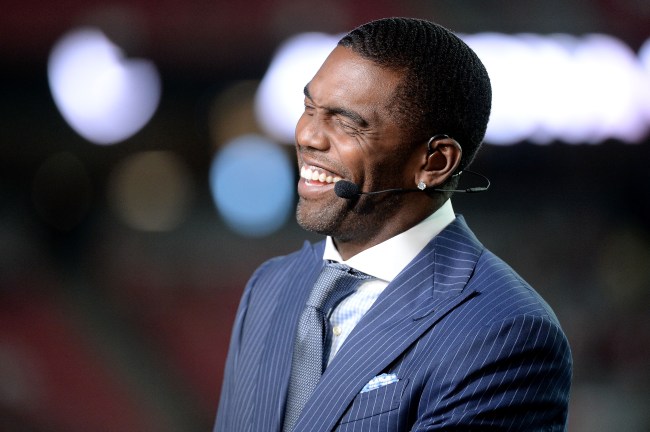 Let’s take it back to the 2013 NFL season. Russell Wilson is in his second year in the league and Seattle is putting together an unbelievable campaign with the likes of Marshawn Lynch and an absolutely loaded defense. As far as Wilson’s weapons at wide receiver, he had Golden Tate, Doug Baldwin, and Percy Harvin, but Harvin went down with an injury and played just one regular-season game that year.

It all worked out okay for the Seahawks seeing as how they went on to beat the Broncos 43-8 in the Super Bowl that season, but what if I told you Randy Moss could have been a part of that team? According to Moss himself, it almost happened.

During a podcast appearance with Wilson, Moss explained that after Harvin went down with injury Seattle called him up and offered him the opportunity to join the squad.

“Percy [had just gotten] hurt. I get a call. I’m working for FOX. I’m working out, but I’m not training. I stopped training three weeks prior, and I was training because I figured if a team wanted to pick me up for the playoffs, I would at least honor that. So he called an told me Percy got hurt and the guys would be ecstatic if you came through the locker room.”

Moss told the team that he appreciated the opportunity, but that he would have to pass because he wasn’t physically ready.

Nevertheless, after Moss explained this to Wilson, the quarterback was devastated that it didn’t happen. Wilson didn’t even know this entire situation ever happened.

“My heart hurts,” said the Seahawks quarterback. “I wish somebody would have told me. We would’ve made this happen.  … Now I’m going to have dreams of playing with Randy Moss in my lifetime.”

Moss had just retired after the 2012 season after catching 28 passes and scoring three touchdowns for the 49ers. The Hall of Famer played for five different teams during his 14 seasons in the league.