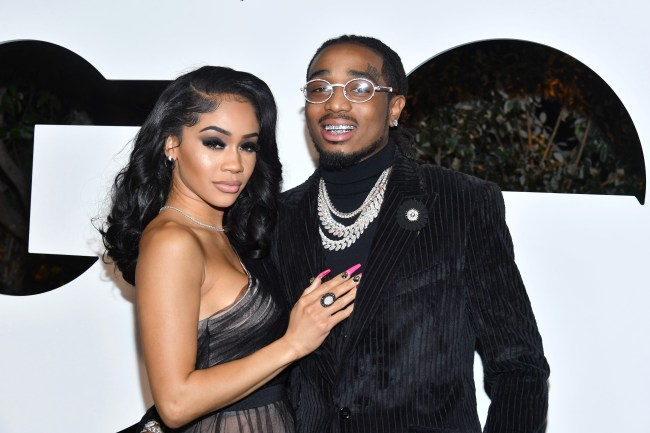 It seems like Quavo wasn’t going to allow his ex-girlfriend to keep the Bentley he gifted her after their public breakup.

Back in December, the Migos rapper gave his then-girlfriend Saweetie an expensive “iced-out” Bentley as a Christmas gift.

Unfortunately, Saweetie and Quavo broke up earlier this week and they’re both accusing each other of being responsible for the relationship falling apart.

I’m single. I’ve endured too much betrayal and hurt behind the scenes for a false narrative to be circulating that degrades my character. Presents don’t band aid scars and the love isn’t real when the intimacy is given to other women.

I emotionally checked out a long time ago and have walked away with a deep sense of peace and freedom. Excited for this new chapter of elevation 🙏🏽

I had love for you and disappointed you did all that. You are not the woman I thought you were. I wish you nothing but the best 🙏🏾.

According to a report from Media Take Out, Quavo had leased the Bentley in his name and contacted the dealership to end the lease early which led to the car getting repossessed.

The friend claims that the Bentley was “leased” in Quavo’s name. And that the Migos rapper had a deal with the dealership that he could for a fee end the lease early, and the dealership would repossess the car and let him out of the contract.

And that’s exactly what Quavo did, according to his friend.

The insider continued, “He’s not being petty or anything, but she’s on Twitter talking sh*t. So he took back the car”.

The Internet immediately had jokes about Quavo having the Bentley repoed.

Quavo taking back the Bentley from Saweetie pic.twitter.com/Djym99KSrR

Quavo sent the repo man to get that Bentley from Saweetie 😂 pic.twitter.com/mr8DNJn92t

"take back your Bentley" pic.twitter.com/6EDBPjg6mo

Quavo took back his bentley

Quavo took his Bentley back. Lord future is proud 😌 pic.twitter.com/PpvkauuUFC