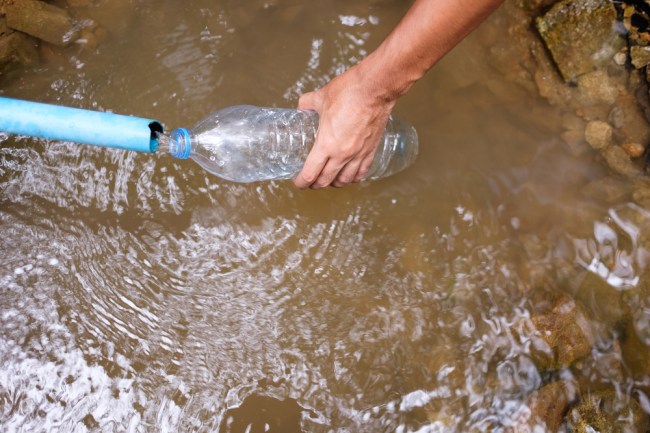 Sadly, 844 million people worldwide do not have access to an improved water source, 2.1 billion lack access to safe water at home, and 1 in 9 don’t have clean water close to home. Diarrhea caused by dirty water and poor toilets kills a child under 5-years-old every two minutes. In the United States, we often take this necessity for granted since it is readily at everyone’s disposal. However, there are some Americans who are purposely drinking untreated, unfiltered water because it is the latest health craze. Despite being priviliedged enough to have access to clean water, there people prefer to pay a premium for something called “raw water” and it can literally kill them.

Last week, the New York Times ran an article about the bizarre trend of raw water. At the Rainbow Grocery in San Francisco’s Mission District, the store was selling raw water for $36.99 for 2.5 gallons. After a New York Times article was published demand grew and they then started charging $38.49 for the same 2.5 gallons or $60.99 for the raw water in a decorative jug. A typical 2.5-gallon jug of regular old filtered water costs approximately $5 and a glass of tap water is basically free. Despite the ludicrous price of the raw water, it sold out. That’s because with every 2.5-gallon jug of raw water you get a free serving of Giardia, typhoid, dysentery, E.coli, Cryptosporidium, Shigella, cholera, Hepatitis A, norovirus, and Salmonella!!! ALL THAT FOR ONLY $60.99!!! What a steal!

It is sold out because people from Silicon Valley believe raw water is better for you. Narrator: It’s not. Doug Evans, the cofounder of the failed startup Juicero, says he has been drinking raw water for nearly two decades now. “If you have heavily processed water with chemicals in it that are designed to kill bacteria, then I think it can really materially alter the body,” he said. “The springs that I will drink from have all been tested — and the closer you’re drinking it to the source, the safer it is. So I think that if you’re drinking from a natural spring at the source, it tastes better. And I feel good drinking it.”

2018 hotness: Infecting yourself with Cholera pic.twitter.com/37cs3fUxBj

Let’s see what the CDC has to say about drinking unfiltered, untreated, unsterilized water. “While the water flowing in the streams and rivers of the backcountry may look pure, it can still be contaminated with bacteria, viruses, parasites, and other contaminants,” the CDC say . The EPA says unfiltered water may contain microorganisms, viruses, parasites, radionuclides such as uranium and radium, radon, nitrates, nitrites, fluoride, heavy metals such as arsenic, cadmium, chromium, lead, and selenium. All of which can cause sickness or prolonged use may bring even worse ailments. Not to mention that elks probably take huge elk dumps in that raw water stream that you’re gulping.

Raw water companies such as Live Water in Oregon are making a killing selling unfiltered water for extremely exorbitant prices. Mukhande Singh, founder of Live Water, told the NYT that tap water was “dead” water. “Tap water? You’re drinking toilet water with birth control drugs in them,” he said. “Chloramine, and on top of that they’re putting in fluoride. Call me a conspiracy theorist, but it’s a mind-control drug that has no benefit to our dental health.”

The internet did not hold back in their ridicule of the dangerous water that is crazy overpriced with sarcastic tweets and memes.

If you’re spending $36 on two gallons of “raw water” you’re an idiot https://t.co/g9MykwZGnO —

🙏🏼 @NellieBowles for this early contender for the “most loathsome of 2018” award. pic.twitter.com/e8GbklbTSa

you guys this story about “raw water” is so funny, every sentence is a gift https://t.co/5zEjayy9mO pic.twitter.com/ulrTLqxL9j

A live look at Silicon Valley elites one week after starting their "raw water" movement… pic.twitter.com/37u0ZialPO

Nearly 800 million people in the world lack access to treated water. These people do it as a fad. https://t.co/oZZ9rix2Mv

“raw water” is the whitest thing I have seen today, and I was just at an IKEA in Portland https://t.co/9JttORxiEy

Not being able to buy $60 raw water that third world nations drink because it's sold out might be the most first world problem of all-time… pic.twitter.com/naoOJzIDKY

I say we let natural selection take its course https://t.co/c5iY7q7eKl

stop telling the silicon valley idiots the raw water will kill them. let 👏 them 👏 die 👏