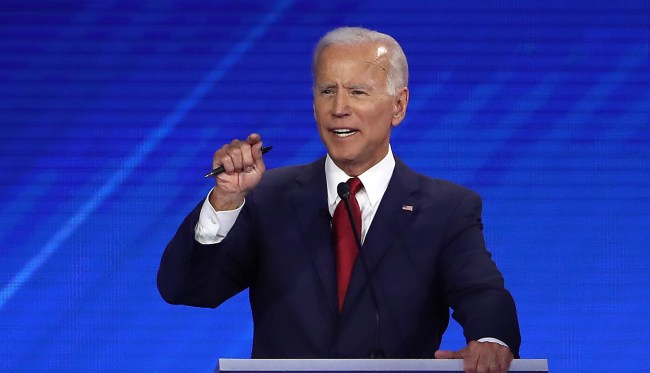 In case you missed it because you were too busy preparing to watch the Carolina Panthers implode in front of a national television audience Thursday night, the Democrats held their third debate in Houston.

If you didn’t watch it, well, then you defied O.J. and I cannot be held accountable for what happens to you down the road.

Make sure you watch so you‘ll be informed. #DemocraticDebate pic.twitter.com/akpAZSBHa9

Anyway, all the stars were there, Bernie, Joe, Beto, Elizabeth, Kamala, Cory, Bill, Pete, Tulsi… Some of the candidates did well, while for others it was a struggle.

Former Vice President Joe Biden was one of those for whom the struggle was definitely real Thursday night.

No, I’m not talking about how well he answered the debate’s host David Muir’s questions. I am referring to the fact that Biden’s teeth appeared to almost fall out of his mouth at one point during the debate.

When Muir asked Biden about his ability to pass gun control proposals, the 76-year-old candidate answered, “Because I’ve got it done before. I’m the only one up here that’s ever beat the NRA. Only one to beat the NRA nationally. I brought the Brady Bill into focus and became law.”

Not that anyone heard him. Everyone was too busy wondering just what in the hell was going on with his mouth.

Seriously, Joe, you okay? You’ve had a rough last couple of weeks.

Naturally, because 2019, the internet immediately went into overdrive with questions, analysis, and of course, many funny jokes.

Was it just me or did it look like Biden's teeth almost fell out and then he was fixing it with his tongue?

Did… Joe Biden's teeth just almost fall out? Am I seeing things?#DemDebate

Joe Biden’s teeth fell out, right? How high am I?

I was expecting one of Biden's arms or ears or his nose to fall off during the debate. Instead it was just his false teeth that malfunctioned

Did @JoeBiden almost lose his dentures? What a weird moment. Even his teeth can't remember what he is going to say

@JoeBiden has the teeth that @elizabethwarren is gonna help us pay for!

These debates should end with a talent contest-type event. I’d like to see @AndrewYang play a clarinet or @JoeBiden do that teeth trick again. #YangGang

As a knee jerk reaction to tonight's debate, I opened an account for Joe Biden's teeth, only to discover that there were already several. Very disappointing.

Of course, there were.