What Will It Be Like Performing Music In Front Of Thousands Again? We Asked Rebelution’s Eric Rachmany 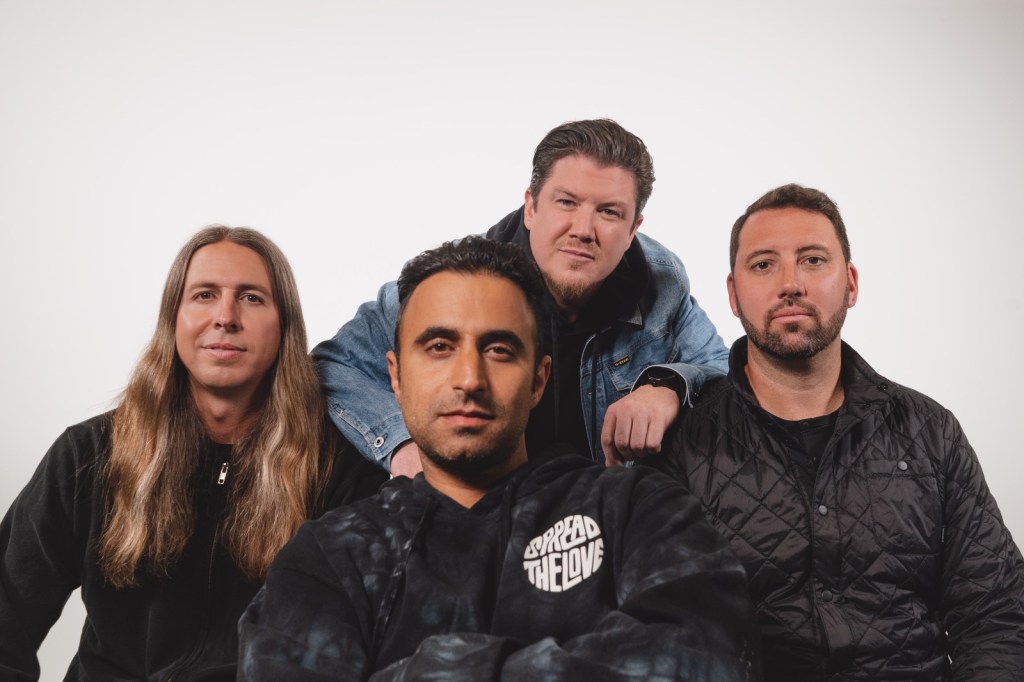 California-based Reggae Rock band Rebelution’s 8th studio album was just released. In the Moment has the characteristic sound that fans have come to love from Rebelution but there are some interesting new elements in this album.

For starters, the album really plays with the concept of time. Looking ahead in life, living in the moment, and taking a look at the past. It’s natural to take stock of life after everything that happened in the past year but I was fortunate enough to speak with Rebelution’s singer Eric Rachmany about why In the Moment played so heavily with the elements of time.

Since Rebelution last toured, Eric Rachmany has moved back to California from Guam. He has also become a new dad and has a toddler playing music around the house now. I asked him what would be different on this tour compared to years past, what the future holds for Rebelution, and if he ever gets nervous in front of crowds (spoiler alert: he does).

You can stream Rebelution’s new album In the Moment now on Spotify, Apple Music, Amazon, iTunes, and everywhere else you get your music. You can check here for sources of where to get this album. And you can read my interivew with Rebelution’s Eric Rachmany about the origins of Dub Style Reggae right here.

Cass: I think a lot of the songs on In The Moment stick to the root sound I love from you guys, but there are some interesting tracks on there. The concept of time was everywhere in the album. I read your quote about “Some people will tell you that life is short and you’ve got to take risks to get what you want. Others will tell you to be patient, that slow and steady wins the race. To be honest, I don’t know who’s right. All you can really do is trust your gut and follow your instincts, and that’s what this record is all about.”

What had you reflecting so much about the past, present, and future going into this album? Was it the pandemic, becoming a father, hitting pause on touring, everything?

Eric: Yeah, I think it was everything I wanna say. And I didn’t plan for this to be in a concept album or anything like that. It looks back at the entire album and I was like, whoa, ’cause there’s a lot of songs and lyrics about time. And like you said, whether we have enough time or too little time. And it’s kind of like this question, why does stuff keep on re-appearing? And I think what we realized was In the Moment was a good title because no matter how you’re looking at time, just to be present and enjoy at the moment for what it is, and you wanna just be thankful for just being present in the moment.

Cass: You guys recorded the In The Moment album completely remotely, have you guys played the songs together in person yet?

Cass: Are you going to have like ‘first day of school’ jitters when you get back with the guys? Because you’ll have the album out and the break until August when you start touring yet, what does that time look like? Will you be able to practice these songs?

Eric: Oh yeah, we’re going to get together and practice pretty hard. Y’know, we’ve been a band for seventeen years. Even if we haven’t been together for a year and a half, we’re all super confident that you just give us a few hours and we’re going to click. We’re gonna spend a lot of time just rehearsing and when we wrote this new album, just like every other album, we’re always thinking about the live scenario.

Even though it was recorded remotely and digitally, we still wanted to give it that ‘live band feel’ and there’s no doubt in my mind it’s going to translate really well. And in fact, I’m really looking for it to hearing some of these songs, the full band and live versions, they’re really gonna go off.

Cass: How did that all work remotely, ’cause I think you have for guest artists on this album. Did they do everything remotely as well, are there any plans to bring them out of special gas to any tour stops?

Eric: Yeah, everything was done remotely. We just kind of sent them the tracks with a little bit of open space. We’re all big fans of those guys. We actually toured with Durand Jones a couple of years back. To have sort of an R&B/Soul/Funk atrist collaborating with us is kind of a curveball that was a really, really cool experience for us. We really love Durand Jones. His vocals are just phenomenal.

And then Keznamdi is one of the guests on tour. He’s going to be on the summer tour as the opening act and so that’ll be great and definitely and be some collaborations on tour. It means a lot for us to collaborate with artists from Jamaica.

Rebelution, we mix it up a lot but obviously Reggae is a huge part to our sound, and when we get put in the Reggae category, we’re really honored, but we also make sure we wanna showcase Reggae Music from Jamaica. Whether that’s like Roots artists, legendary artists that we’ve looked up to. Or newer artists. That’s kind of what we were going for with this new album. Some of the newer artists from Jamaica.

Cass: What do you think the moments leading up to that first show will be like? Are you guys just gonna be on Cloud Nine and ready to get back out and see a crowd again? Are you gonna be nervous at all? You guys are pros. You’ve done this for decades. But are there any nerves because you’ve had some time off?

Eric: You know, it’s interesting. I still get nervous before I hit the stage. But as soon as I get on the stage and the music starts I just get into the music and I don’t really think about being in front of thousands of people. And it helps just getting into the music. But man, just thinking about it, it’s going to be so exciting to feel that rush of energy again and we really, really miss it.

Cass: How did you land on the album artwork for In the Moment with the hourglass, rainforest, and the beach? Was this all conceptual or was it based on anything in your lives?

Eric: We just wanted some sort of imagery to represent time, and we hourglass was good. We thought about a sundial for a little bit. And we like the hourglass for a few reasons. But one reason I really like it is just the night and day kind of polarity and that has to do with the observation of time passing. And then we had a great artist that just kinda brought it to life. Like with every other album we were a part of creating the artwork. And I think our bass player, Marty actually came up with the initial idea.

Cass: One track that popped out to me was ‘Adapt, Survive’. It felt very on the nose for the last year and a half for a lot of younger Americans who want change in America faster than the change is coming. And I was wondering when you guys were writing that song, did you have a specific audience in mind, someone out there you wanted to hear it, a type of person you wanted to hear it, or was it just something you needed to get that off your chest?

Eric: Yeah, for sure. That song specifically has to do with the War on Drugs. We’ve always been pretty big advocates for cannabis. We’ve been involved with this organization called The Last Prisoner Project the past few years and trying to raise as much money for it as possible.

Their goal is to get non-violent cannabis offenders out of prison. There’s a lot of people still locked away in prisons for cannabis possession or selling cannabis. And these are states where it’s actually legal. now, which is pretty crazy to us. And we have been trying to fundraise for that organization ’cause we really believe in their cause. I think the song really has a lot to do with that movement. And we feel like Music can be an incredible educational tool.

Eric: It is. I’ve always missed my family and friends when I hit the road. But it’s going to be a whole new level of being away from home.

Yeah. I’m a little sad in that regard, being away from family, but I’m also really excited for my baby boy to see me perform ’cause he has no idea what I do for a living. So I really plan on having him coming out and seeing the shows as much as I can. I think it’s gonna be really fun and it gives me something to look forward to you.

Cass: Has your son taken a shining to Music at all yet?

Cass: This is kind of a two-part question. So you guys have been a band for 17 years, and I was wondering, do you ever think about what the next 17 years will look like? And then do you look in the rearview mirror, and is there anything with the younger Reggae artists and groups coming up right now that you’re watching and admiring that you guys would ever want to incorporate into your band’s sound? Is it important to kind of keep tabs on the Reggae landscape.

Eric: Yeah, definitely. Well, I think the next 17 years are not gonna be too different than what we’ve already done. We love performing. We love recording. This band is evolving and we’re having a lot of fun. And I feel really fortunate that we’re in the position we’re in where we get to do this for a living.

And then as far as keeping track is some of the younger bands, I like to listen to a lot of music in Jamaica. There are so many different artists coming out every week. And a lot of great producers coming out of Jamaica. a lot of super young up-and-coming talent. It’s just really exciting. And I think especially for Jamaica now, they get categorized into just the Reggae and Dancehall Scene but there are a lot of artists out there that are throwing in a lot of hip-hop and a lot of different music. And so I think Jamaica is really coming out of some awesome music right now.

Cass: Do you think you experiment with any of the tracks on this new album by flipping them into Dub Style versions?

Eric: Definitely, yeah, definitely. We’ll do that at some point. I’m not sure when, but maybe an acoustic version as well.

Cass: As far as the tour goes, are there any dates on there that you’ve got a big star on your calendar? Are there venues you can’t wait to get back and see the friendly faces and all that?

To tell you the truth, all the shows are really fun. there’s not one venue I dislike. Whenever I get on stage and like it could be the worst venue in the world and it’s still fun for us to be on stage and perform. So just looking forward to getting out there and performing and seeing some friends that we haven’t seen for a couple of years now.

You can order, stream, and download Rebelution’s new album In The Moment on Spotify, Apple Music, iTunes, Amazon, Tidal, and others. Just click right here to see all of your options!